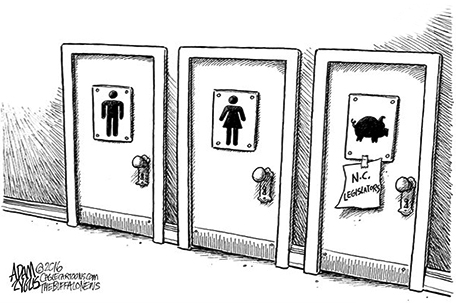 Legislation has been proposed in states across the country to protect those who – due to religious beliefs – decline to employ or serve certain people. Critics say the laws are aimed at the LGBT community and are discriminatory. Recent laws denounced as discriminatory in North Carolina and Mississippi has prompted a growing backlash from opponents. Several country music artists and songwriters have condemned proposed laws that critics say discriminate against LGBT people, but anyone looking for reaction from the record labels and production companies on Nashville’s Music Row has heard only the sound of silence.

New laws in North Carolina and Mississippi have drawn the ire of businesses and celebrities alike, with Bruce Springsteen and Bryan Adams canceling shows in those states. Legislation dealing with the treatment of gays, lesbians, bisexuals and transgender people was vetoed by Georgia’s governor, but bills are still being considered in Tennessee and South Carolina.

Numerous artists with ties to Nashville have denounced the proposals here, which would ban transgender people from using restrooms that don’t conform to their sex at birth and would allow counselors to refuse services to LGBT people on religious grounds. Among them: Emmylou Harris, Billy Ray Cyrus and his pop star daughter Miley Cyrus, and actor Chris Carmack of ABC’s “Nashville.” Here’s a look at legislation around the country:

The Republican-led Senate passed a measure that would expand the state Religious Freedom Restoration Act by barring penalties against those who decline to provide “customized, artistic, expressive, creative, ministerial or spiritual goods or services” to people that would infringe on their “right of conscience” or religious freedoms. The bill is pending in the Democratic-led House.

Michigan Sen. Tom Casperson says he’s firmly committed to introducing legislation to prohibit transgender students from using a bathroom other than the one matching the sex listed on their birth certificate. Casperson said his proposed bill, which has not yet been introduced, would allow transgender students to use staff restrooms in the school, or single occupancy unisex bathrooms, but only with the consent of the student’s parent.

A bill was introduced in late March to require employers and public facilities to designate separate restrooms and changing rooms for men and women. A portion of the bill reads, “No claim of nontraditional identity or ‘sexual orientation’ may override another person’s right of privacy based on biological sex.”

A new law prohibits the government from taking “any discriminatory action” against religious organizations that decline to host marriages, employ people or facilitate adoption or foster care based on a religious belief that marriage should be between one man and one woman, sex outside marriage is wrong or that sexual identity is determined by a person’s anatomy at birth. Several states and cities have banned travel to Mississippi and rock singer Bryan Adams canceled a concert in the state to protest.

The Senate passed a proposed amendment to the state constitution in March that would bar government penalties against individuals and business such as florists or photographers who cite “a sincere religious belief” while declining to provide “services of expressional or artistic creation” for same-sex weddings and receptions. The protections also would apply to clergy and religious organizations that decline to make their facilities available for same-sex weddings. If passed by the House, the proposal will go before voters. The proposal has generated backlash from more than 60 businesses and the Missouri Chamber of Commerce.

A bill to ban workplace discrimination based on sexual orientation and gender identity was defeated in the Nebraska Legislature this year. Lawmakers have shelved the bill for the rest of the year.

Three New Mexico lawmakers in December 2015 introduced a measure “to prevent discriminatory action by a person or a government agency in response to a person’s free exercise of religion.” The proposal died during the 2016 regular session.

A new law prevents local and state government from mandating protections for LGBT people in the private sector or at stores and restaurants. The Legislature held a special session in March to overturn an ordinance in Charlotte that would have allowed transgender people to use bathrooms that correspond to their gender identity. Lawmakers then blocked all cities and counties from passing rules that targeted LGBT discrimination.

North Dakota lawmakers have defeated measures in each of the past three sessions to prohibit discrimination in housing and employment based on sexual orientation.

A new law states clergy and other religious officials cannot be required to perform marriages or provide marriage counseling, courses or workshops that violate their conscience or religious beliefs. On March 14, gay rights advocates in the state celebrated the failure of 27 bills in the Legislature that they said unfairly discriminated against LGBT people.

Pennsylvania’s Democratic Gov. Tom Wolf earlier this month signed an executive order barring state contractors and grant recipients from discriminating based on sexual orientation or gender identity. State Sen. Mike Folmer says he wants to vet the bill in committee to make sure it does not violate anybody’s religious liberties or freedom of conscience.

A South Carolina bill limiting transgender people’s bathroom choices is up for discussion a week after Republican Gov. Nikki Haley and state business leaders called the proposal unnecessary. Sen. Lee Bright, who introduced the measure last week said he’s had enough of tolerance if that means “men who claim to be women” going into a bathroom with children.

The Republican-led House passed legislation barring government from taking “discriminatory action” against people, organizations or businesses based on their “sincerely held religious belief” that marriage should be between one man and one woman, sex outside marriage is wrong or that sexual identity is determined by a person’s biological sex at birth. The bill did not pass before the legislative session ended.

Tennessee lawmakers passed legislation exempting counselors and therapists from providing services to clients related to behaviors that conflict with “a sincerely held religious belief,” as long as they refer the clients to someone else. The American Counseling Association has said Tennessee would be the only state to allow counselors to refuse to treat patients if the bill is signed into law.

Before the U.S. Supreme Court ruled that states must allow gay marriage, Republican Gov. Greg Abbott signed a law last June stating that clergy and religious organizations cannot be required to marry people or allow their facilities to be used for wedding celebrations that violate a “sincerely held religious belief.” Texas did not hold a legislative session in 2016, but the previous year, a Republican-backed bill repealing local ordinances banning discrimination against gay and transgender people failed without reaching a floor vote in either chamber. The proposal attempted to roll back such ordinances that already existed in all the state’s largest cities. Instead, the all-Republican state Supreme Court heard a legal challenge to an anti-discrimination ordinance approved by Houston’s City Council, and ruled that it had to be put to a referendum. Houston voters soundly defeated the ordinance in a November 2015 election featuring very low turnout.

Utah in 2015 passed an anti-discrimination law that makes it illegal to base employment and housing decisions on sexual orientation or gender identity. Gay-rights advocates had tried for years to pass similar legislation but only succeeded last year when the measure won support of the Utah-based Mormon church and included religions protections.

Multiple pieces of legislation concerning sex-specific restrooms were introduced by Republicans in both chambers of Washington’s legislature. A bill that would have blocked the Washington Human Rights Commission from initiating any rule-making procedures involving gender segregated bathrooms died in a Senate committee.

The only bill introduced in the Republican-led Legislature dealing with gays, lesbians and transgender people was a measure to force transgender students in public schools to use bathrooms and locker rooms assigned to their gender at birth. GOP leaders never brought the bill up for a vote before the two-year session ended.

The Republican-led House passed a bill modeled after the federal Religious Freedom Restoration Act, stating that government “shall not substantially burden a person’s exercise of religion” unless by the least restrictive means for a compelling government interest. The bill was amended and then defeated in the Senate.

Injustice at every turn: A look at black respondents in the National Transgender Discrimination Survey