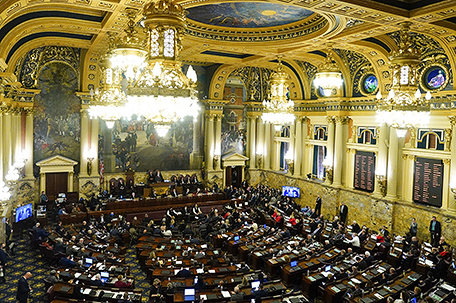 ABOVE PHOTO: Democratic Gov. Tom Wolf delivers his budget address for the 2022-23 fiscal year to a joint session of the Pennsylvania House and Senate in Harrisburg, Pa., Tuesday, Feb. 8, 2022. (AP Photo/Matt Rourke)

HARRISBURG, Pa. — It’s been two months since the contentious, once-a-decade process to redraw Pennsylvania legislative districts wrapped up, and now a couple hundred candidates hoping to unseat or succeed state lawmakers are rushing headlong into the homestretch of a primary election that will greatly cull their numbers.

The state’s legislative redistricting commission produced a map reflecting dramatic shifts in demographics and giving Democrats hope they can gain seats in a General Assembly that has been controlled by Republican majorities for nearly all of the past three decades.

For many incumbents, the changes are requiring them to introduce themselves — and sell themselves — to thousands of potential new constituents.

Going before voters in the May 17 primary election will be candidates for all 203 House and 25 of 50 Senate seats.

In the House, 32 members are not seeking reelection, including a handful running for Senate or other offices. Five Senate seats, all held by members of the Republican caucus, are open because of retirement.

More than 60 state representatives and four senators face no primary or general election opposition, so they effectively have already won another term, simply by qualifying for the ballot. In 24 House and two Senate districts, the incumbent faces only a primary challenge, so even if they lose their party will keep the seat.

All told, voters can expect a choice in the fall between a Republican and a Democrat in about half the House and in 19 Senate districts.

GOP primary challengers have targeted some veteran incumbents, among them Speaker Bryan Cutler of Lancaster County and Appropriations chair Stan Saylor of York County. In both districts, no Democrat is running.

In his primary race, Cutler is defending how he has handled former President Donald Trump’s defeat in 2020’s presidential election, fetal tissue research funding and the state’s response to the COVID-19 pandemic — maybe surprising for a Republican chosen as leader after years of being a reliable conservative vote in Harrisburg.

Cutler said that voters’ current mood in his rural district seems driven by the pandemic, and that he has tried to direct that displeasure toward the state’s Democratic governor and Democratic majority Supreme Court.

“The concern from the electorate is very real in terms of frustration with government,” Cutler said. “I just think we need to focus more appropriately on the true causes.”

Three pairs of House incumbents are fighting it out after being drawn into districts together.

In a rural area northwest of Harrisburg, Rep. Perry Stambaugh faces a GOP primary against his neighbor to the north, Rep. Johnathan Hershey. And southwest of Allentown, the battle between Reps. Ryan Mackenzie and Gary Day has raised eyebrows among fellow Republicans.

Mackenzie, who has served in the Republican caucus with Day for a decade, put up a website attacking Day as “greedy,” “gutless” and insufficiently conservative on guns and taxes. Philadelphia Democratic Reps. Isabella Fitzgerald and Chris Rabb are running against each other, along with a third Democrat. A Republican is also on the ballot.

“It’s been a unique challenge for me personally with trying to assume office and still campaign,” Covington said this week, the morning after participating in two candidate forums. “It’s definitely been a balancing act. But it’s been exciting.”

Redistricting’s effects are showing up in the Harrisburg suburbs, where two Republican-held House seats will definitely flip to Democrats later this month. GOP Reps. Sue Helm and Andrew Lewis both decided not to seek reelection after redrawn boundaries made their districts overwhelmingly Democratic. Republicans did not field primary candidates in either race.

The redrawn lines have attracted four challengers to Harrisburg Democratic state Rep. Patty Kim, whose district now straddles the Susquehanna River. There are two other Democrats in the primary and a pair of Republicans facing off to run in the fall.

In the state Senate, unopposed in both the primary or general elections are Democrats Christine Tartaglione of Philadelphia and Wayne Fontana of Allegheny, and Republicans Pat Stefano of Fayette and Camera Bartolotta in Washington.

There are five Senate districts without an incumbent. Republican Sens. Tommy Tomlinson of Bucks, Bob Mensch of Montgomery, Jake Corman of Centre and Mario Scavello of Monroe all opted against running again, as did the chamber’s lone independent, Sen. John Yudichak of Luzerne, who has caucused with Republicans.

Corman, the Senate’s highest-ranking leader and a candidate for governor, saw his district get moved by the Legislative Reapportionment Commission to the West Shore suburbs of Harrisburg, where population is growing. Yudichak opted not to run again after being drawn into a district with Sen. Lisa Baker (R-Luzerne) and his seat was moved to the Lehigh Valley.