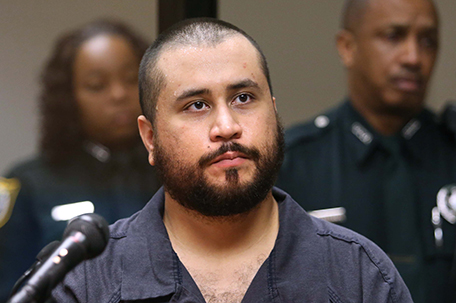 By Kyle Hightower and Mike Schneider

LAKE MARY, Fla.  — George Zimmerman, the neighborhood watch volunteer who has had a series of run-ins with girlfriends, his ex-wife and random strangers since killing an unarmed black teenager, narrowly missed getting shot Monday after a mysterious dispute.

The dispute this time was with the same man that authorities said was involved in a road rage incident with Zimmerman last year. A bullet missed his head, spraying glass from the vehicle’s windshield, said his attorney, Don West. He said the bullet lodged somewhere in the vehicle. He was treated at a hospital and released.

No charges were immediately filed against either man.

Lake Mary Police Officer Bianca Gillett said during a news conference Monday that Matthew Apperson called 911 to report the shooting shortly after Zimmerman flagged down an officer to say someone had shot at him. Both Zimmerman and Apperson have yet to be interviewed formally by investigators, she said.

“We have not determined how or why the incident or altercation began,” Gillett said.

A woman who answered the phone at the disability-benefits business where Apperson works asked a reporter never to call again. Nobody answered the door at his Winter Springs condominium, where there is a “for sale” sign out front and a lock box on the door.

Last September, Apperson said Zimmerman threatened to kill him, asking “Do you know who I am?” during a confrontation in their vehicles. Apperson decided not to pursue charges, and police officers were unable to move forward without a car tag identified or witnesses.

“I explained to Matthew that without the tag, witnesses, and/or clear video identifying the driver as George Zimmerman, it might be difficult to prove the alleged suspect was in fact Zimmerman,” the Lake Mary police officer wrote in a report last September.

West said before the news conference that Zimmerman thought he knew who was responsible for the shooting and is cooperating with authorities.

Zimmerman was acquitted in the February 2012 killing of Trayvon Martin, an unarmed black teenager, in a case that sparked protests and national debate about race relations. The Justice Department later announced it was not bringing a civil rights case against Zimmerman.

Since then, Zimmerman has had several brushes with the law, including:

— He was charged with aggravated assault after being accused of throwing a wine bottle at an ex-girlfriend, Brittany Brunelle. The case was dropped in January after she recanted her story and refused to cooperate.

— Following another domestic confrontation, he was arrested on charges of aggravated assault, battery and criminal mischief after his then-girlfriend said he pointed a gun at her face during an argument, smashed her coffee table and pushed her out of the house they shared. Samantha Scheibe decided not to cooperate with detectives, and prosecutors didn’t pursue the case.

— Zimmerman was accused by his estranged wife of smashing an iPad during an argument at the home they had shared. Shellie Zimmerman initially told a dispatcher her husband had a gun, though she later said he was unarmed. No charges were filed because of a lack of evidence. The dispute occurred days after Shellie Zimmerman filed divorce papers.

iPad video could be key in George Zimmerman case