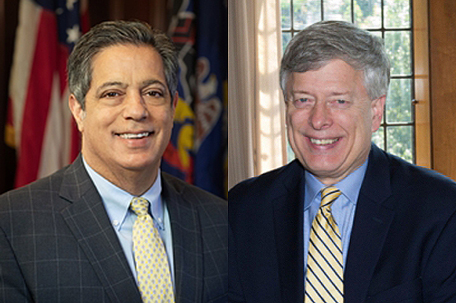 HARRISBURG, Pa. — Legislative leaders on the five-person group redrawing state lawmakers’ district lines based on census data heard last Tuesday how the delay in the release of updated population figures may require them to move more quickly than anticipated.

Comprehensive census numbers might not reach the state’s Legislative Reapportionment Commission before the end of September, and counties need the new maps by Jan. 24 in order to provide the requisite information to candidates and others circulating nominating petitions during a period that kicks off on Feb. 15.

The chairman, former University of Pittsburgh chancellor Mark Nordenberg, said the pandemic-delayed census data, which had once been expected by April 2021, will arrive in less user-friendly form in late August, then “in quote, ‘final form’ at the end of September, and even then there are adjustments to the data that will need to be made.”

“The key clash, if I can call it that, is the intersection — or lack of intersection — between the reapportionment process and the deadlines for primary elections,” Nordenberg said.

Brent McClintock, executive director of the Legislative Data Processing Center, told the commission that the process of turning census data into “adjusted and validated data” will likely take until mid-October.

After the commission produces the new maps for the state House and Senate, and after any appeals have been decided by the state Supreme Court, then county boards of election need about three weeks to prepare for the petition gathering process to begin in February.

Candidates have until March 8 to submit signed nominating petitions to appear on the May 17 primary ballot. There are also primary-driven deadlines for advertising new districts in local newspapers and for sending out overseas, absentee and mail-in ballots.

“There is so much work that gets done behind the scenes well ahead of election day,” Jessica Mathis, director of the Department of State’s elections bureau, told the commission during a meeting in the Capitol.

Allegheny County Sen. Jay Costa, the Democratic floor leader, said one solution may be to compress the 13-week period between Feb. 15 and May 17.

“There are places we can go to shorten the time frame without impacting the nature of our process,” Costa said. “The question is, do we need a 13-week period of time to communicate with the voters?”

As for a potential delay in the May 17 primary date, which would require passage of a new law, a House Republican spokesperson said earlier Tuesday that the GOP caucus does not currently support that idea.

Nordenberg said the panel’s next steps include gathering public input about the process.

Nordenberg served as Pitt’s law school dean and then chancellor until 2014. He currently heads the university’s Institute of Politics. Nordenberg was selected by the Democratic-majority state Supreme Court in May after the four caucus floor leaders of both chambers of the General Assembly could not agree on the critical fifth member.

The commission will draw and approve new legislative districts before the 2022 elections in response to demographic changes reflected in the 2020 U.S. Census. New district lines for the state’s congressional seats are done as state legislation, requiring approval by both legislative chambers and the governor.

The state’s population is flat or falling in largely Republican areas in northern and western Pennsylvania, while some eastern and south-central areas of the state have been experiencing modest growth. Pennsylvania lost a congressional seat because of the census, dropping its delegation from 18 to 17 members.

The 50 Senate and 203 House districts must be compact and contiguous, and as equal in population to each other as “practicable,” with no districts dividing counties, cities or towns unless absolutely necessary.