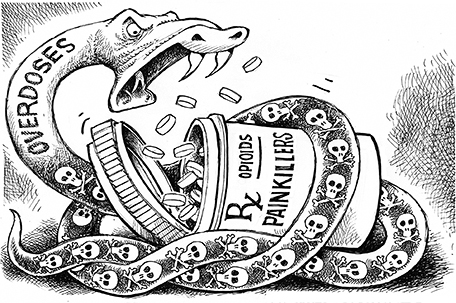 MEMPHIS, Tenn.–The circle of patients gathered for group therapy at a doctor’s family practice in McKenzie could well represent the face of the state’s opioid epidemic.

They were in a small city in a rural county, fertile ground for prescription drug addiction, though they traveled from as far as Nashville and Missouri. They were young or middle-aged and ranged from blue-collar workers to businesspeople. They said painkillers prescribed after accidents or injuries paved the way to their dependence on opioids.

They also were all White.

Of all deaths in 2015 from opioid and heroin overdoses in Tennessee and nationwide, about 90 percent of the people were White.

Black people accounted for little more than 6 percent in Tennessee and 8 percent across the country, according to U.S. Centers for Disease Control and Prevention data.

Among African-Americans critical of the modern drug war launched four decades ago by President Richard Nixon, the fact that the opioid epidemic is primarily striking the majority race helps explain why it is largely being called an epidemic and treated as a public health crisis, rather than a war.

“Look at the inner city, it’s always been what we consider an epidemic,’’ said the Rev. Ralph White, pastor of Bloomfield Full Gospel Baptist Church in Memphis.

“If this had been the case in other areas, the community would have been crying out long ago,’’ White said. “But now that it’s taking the lives of European Americans, we find that it’s at a time of crisis.’’

Michael Eric Dyson, a Georgetown University sociology professor as well as minister and author, offered a similar view after an appearance in February at the University of Memphis.

Doctors and other health care professionals certainly are calling for a health care-led response to the opioid epidemic.

Their strategies include curbing use of painkillers like oxycodone, making wider use of medications to treat opioid dependence as a chronic disease, and increasing mental health services and therapy to attack root causes of addictions.

“I would say the good news in Tennessee is that the number of narcotic units prescribed has gone down by almost half,’’ said Dr. Daniel Sumrok, the physician treating patients at his practice in McKenzie, a West Tennessee city with a population of more than 5,500 about 130 miles northeast of Memphis.

“The bad news is that overdose deaths have gone up and oxycodone has gone up,’’ said Sumrok, also director of the Center for Addiction Science at the University of Tennessee Health Science Center based in Memphis.

Sumrok and other health care professionals are careful not to paint the current drug crisis in terms of rich or poor, urban or rural, Black or White.

“My patients are district attorneys and teachers and nurses and doctors,’’ he said. “They’re not what you might think of as a TV bum; they’re people who have real lives, real jobs, real families, real values who found themselves opiate dependent and need some help.’’

Still, when it comes to race, clear differences emerge.

The National Institutes of Health recently warned that yearly percent increases in deaths among White Americans ages 25 to 30 from 1999 to 2014 rose at rates comparable to the onset of the nation’s AIDS epidemic or in Russia following the collapse of the Soviet Union. Premature deaths for African-American, Hispanic and Asian and Pacific Islanders continued to decline.

Drug overdoses, suicide and liver disease are stoking the alarming rise in premature accidental White deaths, as well as among Native American and Alaskan natives, the study found.

“In high-income countries, you expect us to make progress over time, you expect the death rate to decrease, you expect life expectancy to increase,’’ said Meredith Shiels, a National Cancer Institute researcher and lead author of the study. “So when something comes in and reverses that, and suddenly the mortality rate is increasing in any given group, that’s an alarm that there is something very serious and epidemic going on,’’ Shiels said.

Statewide statistics for the Tennessee Department of Mental Health and Substance Abuse Services point to differences between the illegal drugs by race.

For 2015, White Tennesseans made up 89.5 percent of 839 people treated primarily for heroin and 95 percent of 4,071 treated for prescription opioids, according to the department.

Black Tennesseans made up 62 percent of 1,176 treated for cocaine or crack and 45 percent of 2,065 in treatment for marijuana use.

The nation’s previous heroin crisis struck during the Vietnam War era, giving rise to the drug war and “just say no’’ responses to what was viewed a criminal behavior epidemic, said Dr. Altha Stewart, a psychiatrist and director of the Center for Health in Justice Involved Youth at UTHSC.

“It was considered acceptable that drugs were within the purview of people who were already morally corrupt anyway and so these were things that they did to themselves and you could not rehabilitate them, you had to incarcerate them,’’ Stewart said.

For today’s opioid crisis, policymakers are more likely to have experienced children or grandchildren taking grandma’s pain medicine and then shifting to cheaper heroin on the street, said Stewart, who is slated to become the first African-American president of the American Psychiatric Association in mid-2018.

The UTHSC Center for Addiction Science provides an example. It was named the nation’s first Center of Excellence in Addiction Medicine last fall for its unusually broad efforts to combat addiction through research and use of basic science, treatment, community outreach and medical education across all specialties.

Sumrok and Stewart highlighted the importance of trauma, measured by adverse childhood experiences research, as a game-changing route to treatment and prevention.

With enough trauma, to help survive a brain chemical called dopamine involved in triggering pleasure and reward takes over, he said.

“Remember, what we’re talking about here is a hijacked normal human response that helps you survive,’’ he said. “Dopamine says to you, `Let’s do that again,’ and you can’t help it.’’

Stewart said adopting the science treatment, as well as identifying youths who may be at risk of incarceration, is a “no-brainer.’’

“There is the role for us; we can get out ahead of this,’’ Stewart said.

Sumrok said that poverty and the decline of well-paying manufacturing jobs are trauma generators shared by Tennessee’s urban areas like Memphis and its rural areas like McKenzie.

In Memphis, whether the opioid crisis leads to more treatment-oriented policies and an end to the drug war is an open question for White.

“It might, if they use it to cover every drug addiction, not just opioid addiction or prescription medicines, if they look at that young guy on the street who is hooked on crack and include him in the process of healing,’’ White said. “That would be great.’’