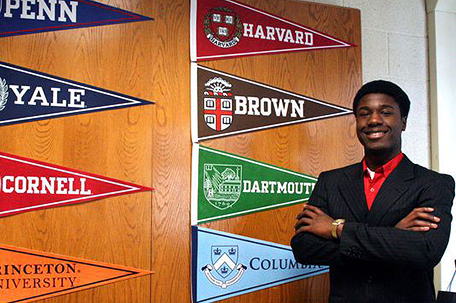 NewsOne Kwasi Enin, a senior at William Floyd High School in Shirley, New York, applied to all eight Ivy League Universities—Harvard, Yale, Princeton, Brown, University of Pennsylvania, Columbia, Dartmouth, and Cornell—and was accepted to all of them.

“My heart skipped a beat when he told me he was applying to all eight,” says Nancy Winkler, a guidance counselor at William Floyd. In 29 years as a counselor, she says, she’s never seen anything like this. “It’s a big deal when we have students apply to one or two Ivies. To get into one or two is huge. It was extraordinary.”

The feat is extremely rare, say college counselors — few students even apply to all eight, because each seeks different qualities in their freshman class. Almost none are invited to attend them all. The Ivy League colleges are among the nation’s most elite.

Enin is a first generation American from Ghana. His parents, both nurses, moved to New York in the 1980s.

As previously reported by NewsOne, this is the third big college announcement highlighting Black male excellence in recent weeks.

Avery Coffey, 17, a senior at D.C.’s prestigious Benjamin Banneker Academic High School, applied to five Ivy League schools and was accepted to all of them.

Chad Thomas, a senior football player at Miami’s Booker T. Washington High School, has received 150 scholarship offers for his talent both on and off the gridiron.

Urban League of Phila. presents $70,000 in scholarships to area students