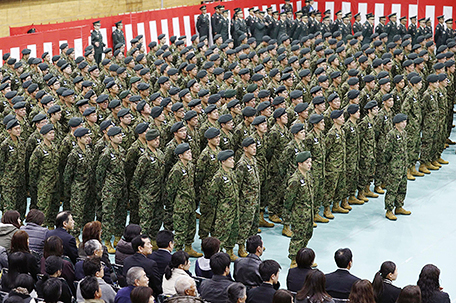 Moon will receive Kim after he crosses the concrete slabs that form the rivals’ military demarcation line Friday morning. They will then walk together for about 10 minutes to a plaza where they’ll inspect a South Korean honor guard, Moon’s chief of staff Im Jong-seok told reporters.

After signing the guestbook and taking a photo together at Peace House, the venue for Friday’s summit, the two leaders will start formal talks at 10:30 a.m. (0130 GMT). They will later plant a pine tree on the border using a mixture of soil from both counties’ mountains and water from their respective rivers. The tree, which is beloved by both Koreas, dates to 1953, the year the war ended, Im said.

Engraved on the stone plaque for the tree will be the phrase, “Peace and Prosperity Are Planted,” as well as the signatures of the leaders. After the tree-planting, the two plan to stroll together to a footbridge where a signpost for the military demarcation line stands, Im said.

The leaders will meet again in the afternoon and later attend a banquet, Im said.

It’s also not clear how the leaders will announce the results of the summit. The most difficult part, Im said, centers on North Korea’s level of denuclearization commitment.

Friday’s summit and Kim’s planned meeting with President Donald Trump in May or early June were arranged after Kim recently expressed a wiliness to put his nuclear program up for negotiation after a year of nuclear and missile tests.

NK says it’s still willing to talk with US