Kill at will: Stand Your Ground laws contribute to 600 additional homicides a year 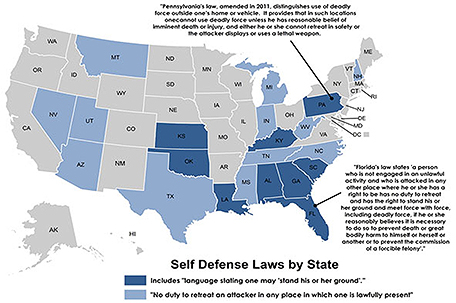 A new study in the Journal of Human Resources reveals that the controversial Stand Your Ground laws in states across the U.S. contribute to 600 additional homicides a year.

This news comes just as the nation learned that 26 children or teens have died in Florida alone under the “kill at will” self-defense law.

According to Mark Hoestra, co-author of the study:

We asked what happened to homicide rates in states that passed these laws between 2000 and 2010, compared to other states over the same time period. We found that homicide rates in states with a version of the Stand Your Ground law increased by an average of 8 percent over states without it — which translates to roughly 600 additional homicides per year. These homicides are classified by police as criminal homicides, not as justifiable homicides.

It is fitting that much of this debate has centered on Florida, which enacted its law in October of 2005. Florida provides a case study for this more general pattern. Homicide rates in Florida increased by 8 percent from the period prior to passing the law (2000-04) to the period after the law (2006-10).By comparison, national homicide rates fell by 6 percent over the same time period. This is a crude example, but it illustrates the more general pattern that exists in the homicide data published by the FBI.