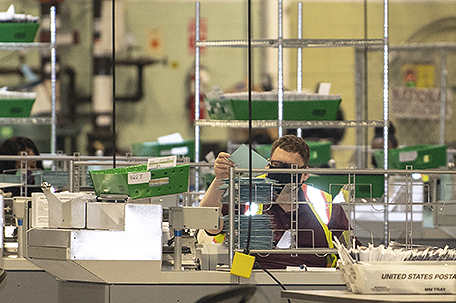 ABOVE PHOTO: Workers count Philadelphia’s mail ballots for the May 18 primary election in Philadelphia, Pa. Tuesday, May 18, 2021. Voters of all kinds, including independents, were allowed to vote on four ballot questions, including two that stemmed from Republican lawmakers’ dissatisfaction with how Gov. Tom Wolf, a Democrat, wielded his authority during the COVID-19 crisis. (Jose F. Moreno/The Philadelphia Inquirer via AP)

HARRISBURG, Pa. — A wide expansion of mail-in voting in Pennsylvania survived a legal challenge on Tuesday before the state Supreme Court in a case brought by some of the same Republican state representatives who voted for the legislation nearly three years ago.

Millions of state voters have chosen to cast ballots by mail in recent elections, although Democrats have used it in far greater numbers and the law fell out of favor with Republicans as former President Donald Trump attacked it during his losing 2020 reelection campaign.

The 5-2 ruling, with the two Republican justices both voting no, means expanded vote-by-mail will almost certainly be in place for marquee races in November for governor and U.S. Senate.

“We find no restriction in our Constitution on the General Assembly’s ability to create universal mail-in voting,” wrote Justice Christine Donohue in the majority opinion.

Widener Law Commonwealth professor Michael Dimino, who argued the case for the lawmakers and others who sued, declined immediate comment.

A lower court panel with a majority of Republican judges had thrown out the law in January, a ruling put on hold while the state Supreme Court reviewed an appeal by the administration of Democratic Gov. Tom Wolf.

“Today, this court upends the tradition and historic preference in this commonwealth for in-person voting without the requisite ‘special justification’ and important reasons necessary to set aside long-standing precedent,” Brobson wrote. “Mere disagreement with that precedent is not enough.”

The majority cited a provision of the Pennsylvania Constitution that concerns “method of elections” and says all elections shall be by ballot “or by such other method as may be prescribed by law.” That section was apparently motivated by the use of voting machines a century ago.

Donohue wrote that the constitutional provision means the General Assembly can “prescribe any process by which electors may vote,” bound only by a requirement that the secrecy of a vote must be maintained.

Wolf’s lawyers had told the court the current version of the state constitution should not be interpreted to outlaw voting by mail that goes beyond allowing it for people who are out of town on business, ill, physically disabled or performing election day duties or a religious observance.

They said the constitution establishes only minimums for absentee and mail-in ballots, minimums that over decades were expanded by letting military spouses and those on vacation vote by absentee ballot even though neither is expressly permitted in the state constitution.

In a dissent, Republican Justice Sallie Mundy said it was “self-evident that the integrity of electoral actions becomes more difficult to verify when they are undertaken at a distance and outside of public scrutiny,” making fraud more difficult to detect and leaving a greater chance for honest mistakes because voters can’t get help from election officials at a polling place.

But Donohue wrote that the court is “unaware of any evidence,” with “any” in boldface, “to call into question the integrity of any elections in this commonwealth since the enactment of Act 77,” the 2019 mail-in expansion, “including those in 2021, in which appellate court jurists at all levels were elected and subsequently seated.” Brobson was elected to the high court last year.

Meanwhile, 14 Republican state lawmakers sued last month in another attempt to get the mail-in voting law thrown out. That lawsuit hinges on a provision that says the law becomes void when any of its requirements are struck down in court.

The pending lawsuit says the “non-severability” provision was triggered by a May 20 decision by a panel of the 3rd U.S. Circuit Court of Appeals over the law’s requirement that mail-in ballots have a voter’s handwritten date on the outside envelope. The federal appeals court panel found that a handwritten date had no bearing on a voter’s eligibility in a Lehigh County judicial race last November.

More than half of states now allow no-excuse absentee voting. Pennsylvania joined them in 2019, when Wolf agreed to a deal that also got rid of the straight-ticket voting by party option on ballots. But many Republicans soured on the law as Trump began making baseless claims mail-in voting was rife with fraud and urged Republicans to avoid it.

The GOP’s nominee for governor, state Sen. Doug Mastriano of Franklin County, is among those who voted for the law but now wants to repeal it.