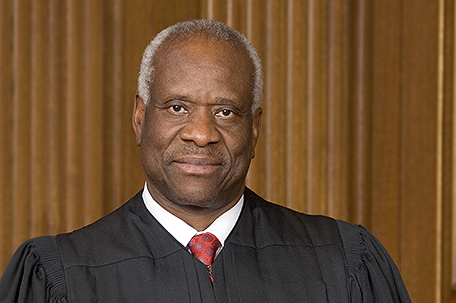 ABOVE PHOTO:  Judge Clarence Thomas  (Steve Petteway, Collection of the Supreme Court of the United States)

And it wasn’t just one question; it was a string of them in an exchange that lasted several minutes.

It was only the second week the court has heard arguments since the death of Justice Antonin Scalia, Thomas’ friend and fellow conservative, whom he’d sat next to for seven years. Scalia was famous for aggressive and sometimes combative questions from the bench. His chair is now draped in black in observance of his Feb. 13 death.

Thomas’ gravelly voice unexpectedly filled the courtroom and enlivened an otherwise sleepy argument about gun rights. He peppered Justice Department lawyer Ilana Eisenstein, who was trying to wind up her argument, with 10 or so questions that seemed to be a vigorous defense of the constitutional right to own a gun.

Until then, it had been business as usual for the first 50 minutes of the hour-long session in Voisine v. United States. The court was considering the reach of a federal law that bans people convicted of domestic violence from owning guns.

None of the other justices visibly reacted to Thomas’ remarks.

Eisenstein noted that violating other laws can, in some cases, limit a person’s free-speech rights under the First Amendment.

It was a topic no other justice had asked about. And his comments came after several of the other justices seemed to favor the government’s position that the law applies whether the abuse is intentional or reckless.

Thomas last asked a question in court on Feb. 22, 2006, and his unusual silence over the years has become a curiosity. Every other justice regularly poses questions from the bench.

Thomas has come under criticism for his silence from some who say he is neglecting his duties as a justice. He has said he relies on the written briefs in a case and doesn’t need to ask questions of the lawyers appearing in court.

Carrie Severino, a former clerk to Thomas who now heads a conservative advocacy group, said the justice had kept his silence “because he felt that oral arguments have become less civil and respectful of the attorneys and their arguments over the past two decades, often becoming little more than rhetorical jousting among the justices.”

Like Scalia, Thomas has long championed Second Amendment gun rights. In December, he and Scalia objected when the high court refused to hear a challenge to a Chicago suburb’s assault weapons ban that was upheld by lower courts. Thomas said the justices should not stand by while lower courts relegate “the Second Amendment to a second-class right.”

Thomas did not speak during the court’s second argument on Monday.