Justice Or Else: Min. Louis Farrakhan calls for economic boycott of Black Friday shopping to “Redistribute The Pain” 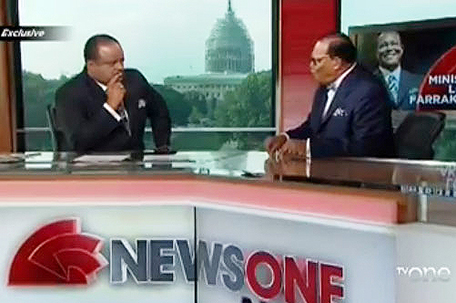 Minister Louis Farrakhan sat down with TV One’s Roland Martin for an exclusive hour-long interview on NewsOne Now to discuss the 20th anniversary of the Million Man March and the upcoming Justice Or Else rally slated to take place on October 10th, 2015.

During the one-hour exclusive, Min. Farrakhan discussed the meaning of the Justice Or Else title to commemorate the historic march. Farrakhan referenced Dr. Martin Luther King, Jr. speaking out about the 1968 sanitation worker strike in Memphis, Tenn.

“We have to find a way to redistribute the pain,” Farrakhan said, citing King.

“He talked about going to businesses that benefited from Black dollars and he said, ‘We have to now withdraw our economic support, so that those who give us pain can receive some pain in return,’” he continued.

The African American community wields between $1.1 and $1.5 trillion in consumer power, which makes ‘Black people a carcass where all the vultures gather to suck the life out of us,’ Farrakhan added.

“You’re either going to treat us right, or we’re going to withdraw from you our economic support,” he said.

“We intend to boycott Christmas, but not Jesus,” said Farrakhan. “So on Black Friday, we won’t be there.”

Martin highlighted the holiday boycott of 2014, during which many African-Americans decided to protest with their wallets and not spend dollars on the Friday after Thanksgiving.

Farrakhan continued, “We choose not to spend dollars on Black Friday, Black Saturday, Black Sunday, Black Monday. We are not going to spend our money for the rest of that year with those that we have traditionally spent our money on.”

Mark your calendars! TV One NewsOne Now moves to 7 A.M. ET starting Monday September 14th. Until then, be sure to watch “NewsOne Now” with Roland Martin, weekdays at 9 a.m. EST on TV One.

For the 20th anniversary of the Million Man March, TV One will present a two-hour special on Friday, Oct. 9 from 8-10 p.m. ET. Presented by News One Now host  Roland S. Martin, the special will feature the network television premiere of the documentary The Million Man March Story, followed by a News One Now primetime roundtable discussion.