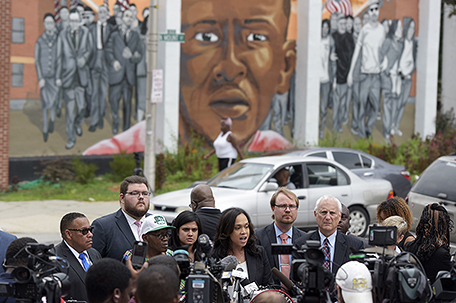 ABOVE PHOTO:  In this July 27, 2016, file photo, with a mural depicting Freddie Gray in the background, Baltimore State’s Attorney Marilyn Mosby, center, speaks during a news conference after her office dropped remaining charges against the three Baltimore police officers who were still awaiting trial in Freddie Gray’ death in Baltimore. Baltimore police officers routinely discriminate against blacks, repeatedly use excessive force and are not adequately held accountable for misconduct, according to a harshly critical Justice Department report being presented Wednesday, Aug. 10, 2016.  (AP Photo/Steve Ruark, File)

The U. S. Department of Justice (DOJ) has announced that its investigation following unrest in the Freddie Gray death case has revealed extreme racial discrimination by the Baltimore City Police Department (BPD).

“The Justice Department announced today that it found reasonable cause to believe that the Baltimore City Police Department (BPD) engages in a pattern or practice of conduct that violates the First and Fourth Amendments of the Constitution as well as federal anti-discrimination laws,” said a DOJ statement Aug. 10. “BPD makes stops, searches and arrests without the required justification; uses enforcement strategies that unlawfully subject African Americans to disproportionate rates of stops, searches and arrests; uses excessive force; and retaliates against individuals for their constitutionally-protected expression.  The pattern or practice results from systemic deficiencies that have persisted within BPD for many years and has exacerbated community distrust of the police, particularly in the African-American community.”

The findings were so severe that the Southern Poverty Law Center (SPLC), a Montgomery, Alabama-based anti-discrimination group and expert on racial hatred in America described the results as “damning”. 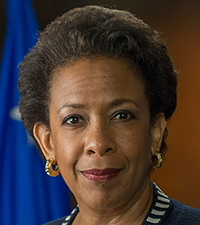 The Justice Department has delivered “a damning indictment of the conduct of police in Baltimore – describing in great detail the nonstop, systematic harassment targeting the city’s Black population. The investigation exposed a staggering degree of racially biased, unconstitutional behavior by police,” wrote SPLC President Richard Cohen. “African Americans are stopped, interrogated and frisked on the street for no reason. They’re frequently arrested without probable cause for misdemeanors like ‘loitering’ or ‘trespassing’ or ‘failure to obey.’ And they’re routinely subjected to police violence, even when posing no threat to anyone and not suspected of any serious crime.”

Among the most egregious violations pointed out by the SPLC:

•  In a 4½-year period, Baltimore police recorded more than 300,000 pedestrian stops, but only a tiny percentage led to charges. One African American man was stopped by police 30 times – and not charged with anything.

•  The blistering DOJ report leaves little doubt that these practices are rooted in racial bias. But while there are surely some who are overtly racist, it wouldn’t be fair to lay all the blame on individual police officers. Beginning in the early 1990s, city and police leaders encouraged ‘zero tolerance’ policies that emphasized the very practices still in place today.

The Baltimore-based NAACP also scrutinized the report saying it is also “damning” for American policing overall.

“We all know that over-aggressive policing that targets African Americans is not just Baltimore’s problem. The DOJ issued similar findings about Ferguson, Missouri, after the killing of Michael Brown, which happened two years ago yesterday. It is, in fact, a deeply engrained problem across America – and part of a larger criminal justice system that has resulted in our country having the world’s highest per-capita incarceration rate,” said NAACP President Cornell William Brook, in a release. “The tactics instituted in Baltimore more than two decades ago were the wrong answer to rising crime rates in impoverished urban areas that for decades have borne the brunt of systemic racism. The DOJ carefully highlights the structural forces at work in the city: poverty, segregation, poor health care access and economic isolation.”

The DOJ report comes weeks after the realization that all six officers charged in the death of Freddie Gray in Baltimore had been exonerated. The first three were exonerated by the judge. Baltimore Prosecutor Marilyn Mosby dropped the charges against the final three.

Still, Attorney General Loretta Lynch said in a release that the conduct of the BPD had for years seriously corroded and undermined the public trust.

“Our investigation found that Baltimore is a city where the bonds of trust have been broken, and that the Baltimore Police Department engaged in a pattern or practice of unlawful and unconstitutional conduct, ranging from the use of excessive force to unjustified stops, seizures and arrests.  The results of our investigation raise serious concerns, and in the days ahead, the Department of Justice will continue working tirelessly to ensure that all Baltimoreans enjoy the safety, security and dignity they expect and deserve,” Lynch said.

Among the rogue practices listed in the DOJ report:

•  Conducting stops, searches and arrests without meeting the requirements of the Fourth Amendment;

•  Focusing enforcement strategies on African Americans, leading to severe and unjustified racial disparities in violation of Title VI of the Civil Rights Act and the Safe Streets Act;

•  Using unreasonable force in violation of the Fourth Amendment;

•  Interacting with individuals with mental health disabilities in a manner that violates the Americans with Disabilities Act; and;

•  Interfering with the right to free expression in violation of the First Amendment.

The DOJ has issued specific principles and policies to which the department must agree in order to correct the past violations and prevent the going forward. They are:

•  Policies, training, data collection and analysis to allow for the assessment of officer activity and to ensure that officers’ actions conform to legal and constitutional requirements;

•  Officer support to ensure that officers are equipped to perform their jobs effectively and constitutionally; and

•  Community policing strategies to guide all aspects of BPD’s operations and help rebuild the relationship between BPD and the various communities it serves.

The agreement provides a framework for change, but the DOJ is also seeking community outreach “to solicit input in developing comprehensive reforms.”