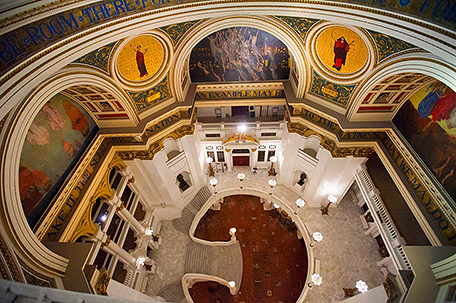 ABOVE PHOTO: New, simple-to-understand fact sheets have been compiled that list the effects Gov. Tom Wolf’s budget would have on each part of the state.  (Photo courtesy Pennsylvania General Assembly.)

HARRISBURG, Pa. – The rhetoric’s getting thick around Gov. Tom Wolf’s big budget package, but the Pennsylvania Budget and Policy Center says it can help.

The organization has produced easy-to-understand two-page “Budget Fact Sheets” that detail the effects that Wolf’s complex proposal would have on each state House and Senate district.

Stephen Herzenberg, executive director of the Keystone Research Center, says the summaries show what each legislative and school district would get in terms of new funding, and how much property tax relief a typical homeowner in that community could expect. He says the “plain facts” are there to help Pennsylvanians decide for themselves.

The fact sheets can be found on the center’s website.

In one example, the fact sheets for Titusville show that school district would get $550,000 more, and a typical homeowner there would pay nearly $300 less in property taxes.

Some have criticized the new natural-gas severance tax that would pay for part of that. But Titusville School District Superintendent Karen Jez says in the past few years, they’ve had to lay off one of every six staffers.

Jez adds the district is concerned that the property tax relief is done in the right way, so it can continue to rely on that income in the future.

Along with a number of other changes, Gov. Wolf also has proposed raising the minimum wage. The fact sheets include the percentage of workers in each district who could expect a bump.