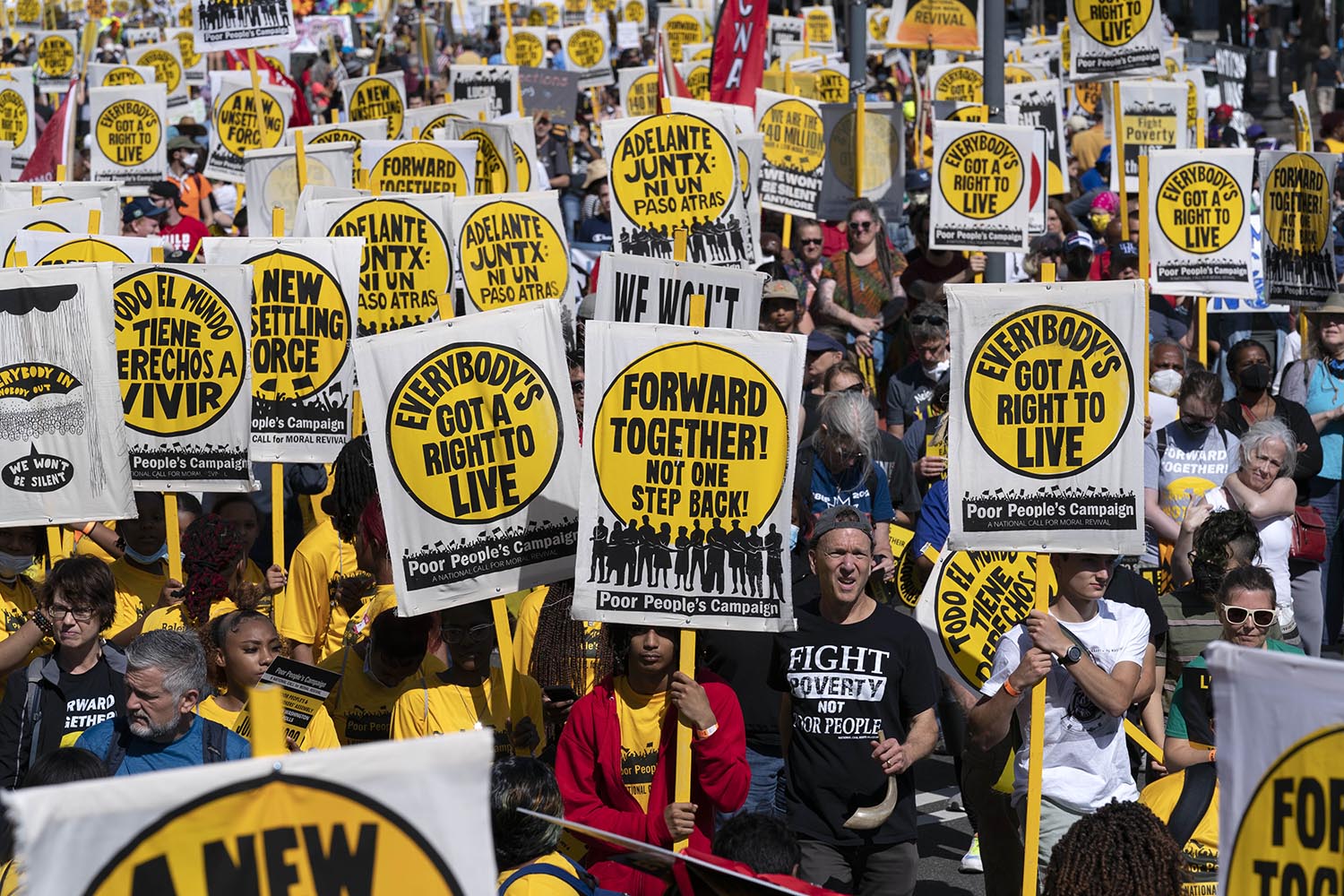 Over 150,000 people from around the country participated in the Mass Poor Peoples and Low-Wage Workers’ Assembly and Moral March on Washington and to the Polls in Washington, D.C. on June 18, while millions more streamed it online. In the end, it was just the beginning of a concerted effort toward permanent policy reform.

Some of their concerns were written in yellow, blue, and pink chalk near the march’s starting point on Pennsylvania Avenue:

Given the recent Supreme Court decisions regarding gun rights and abortion handed down in the following week, as well as the decisions being made at the policy level by Congress and state legislators around the nation in this supercharged midterm election year, the event was timely.

And while all these decisions, and more, affect the entire nation, they disproportionately affect its 140 million poor and low wealth residents.

Overall, the event focused on the intersectionality between generations and issues of concern. It was less about passing the torch, or about one cause being more important than another than it was about cooperation and shared interests, all with the impact on the poor in mind.

The event’s aim was clear from the start. It paid homage to those who fought in many of these battles years ago — in particular, Dr. Martin Luther King, Jr., who spearheaded the original campaign in 1968 before he was assassinated, and whose widow, Coretta Scott King, saw it through that summer — but it was not a nostalgic or commemorative exercise. Rather, it was a declaration, and those who attended were committed to the cause long-term, regardless of media coverage or social media trends.

On several occasions throughout the day, Rev. Dr. William J. Barber II, president and senior lecturer of Repairers of the Breach, and co-chair of the Poor People’s Campaign: A National Call For Moral Revival, gently but firmly reprimanded the crowd for excessive chatter, noise and other distractions during the speakers’ stories. It was not a party or family reunion, he said.

One of the key focal points of the event was the telling of stories by those impacted by poverty, speaking on their own behalf — painful, heartfelt, and urgent stories. It was important that they be heard, he said.

“If we can’t listen to one another, they will never listen to us,” Barber said.

Participants heard from designated speakers throughout the day about the impact the issues raised had on the poor and people with low wealth in their states and in their own lives. It was not a time for competition or grandstanding — it was a time for solidarity.

One speaker, Jesse Crow Roberts from Indiana, is a young father who has been struggling to feed his growing family — a 3-year-old and a new baby due in August — and things have been made worse by cuts to the WIC program (Women Infants and Children). One of the most common food staples in this program has been eliminated — baby formula.

Ironic, given all the talk about abortion bans and caring about children, he said.

“Our government finds it necessary to ban abortion, to say that they are saving the children, but more children die as a result of poverty in this country,” he said. “They are taking food from our children’s mouths.”

Denise Coleman of New Orleans presented a harrowing account of her incarceration and the ongoing injustices that she and many others like her endure.

“I was sentenced to a concurrent double life sentence,” she said. “I served 38 years under the old law. That meant that I should have been out after serving the 30 years, and they kept me for another eight years. Why? Because they lost my file.”

While she was there, Coleman lost several close family members — her mother, her husband and daughter. She was forbidden to be with them in their final days, causing her further pain and anguish.

“Why? Because I was poor and wrongfully kept in prison an extra eight years,” she said. “I am a mother, and I was devastated, and I am here to tell you, incarcerated lives matter, too.”

There were many similar stories shared throughout the six-hour long event.

Along with the thousands of people who attended from around the country, Pennsylvanians also turned out in force, united by purpose, no matter what part of the state they came from or what concerns they had.

There were at least ten busloads of people in addition to those who traveled by car or train, said Nijmie Zakkiyyah Dzurinko, co-chair of the Pennsylvania Poor People’s Campaign and co-founder of Put People First! PA.

Individuals and societies deal with several things at the same time, yet all of these things are equally important — similarly, the Poor People’s Campaign believes that we can’t tackle major issues without coming together, Dzurinko said.

“We actually have to tackle them together as part of one agenda,” she said.

The entire “The rest of Pennsylvania vs Philadelphia” divide is invented, politically motivated and media generated, and it’s up to its residents to break down that divide, Dzurinko said.

“The reality is that people in Clearfield County and people in Philadelphia County actually need the same things, but the divides have been forced upon us,” she explained.

This includes some of the misconceptions emanating from Philadelphia, Druzinko added.

“We [residents of Philadelphia] have to get over this, too — this thinking that everyone else in the state is against us and they hate us. … a lot of folks across the board [have] never left their hometown,” she said. “They’ve never left their area. They’ve never been around the rest of the state. We have to have organizing where people [are able to] have the direct experience of understanding what the conditions are, [and of what is] actually going on in all these places.”

In addition to Pennsylvania, there are over 35 Poor People’s Campaign state coordinating committees across the country working on local issues in addition to national concerns, Dzurinko said.

Next steps — The 7 Point Plan

During the assembly, Barber announced a seven-point plan for the Poor People’s Campaign outlining the next steps to be taken. Participants in the plan will take specific actions leading up to the fall midterm elections to press Congress for radical policy changes.

Several references are made to the Third Reconstruction in the plan.

The Third Reconstruction agenda draws on both the revolutionary history of the First Reconstruction after the Civil War and the Second Reconstruction achieved through the civil rights movements of the 20th century. According to the Poor People’s campaign website, it is “a revival of our constitutional commitment to establish justice, provide for the general welfare, end decades of austerity, and recognize that policies that center around the 140 million poor and low-income people in the country are also good economic policies that can heal and transform the nation.”

The plan outlines key areas of concern and specific actions that need to be undertaken, including: An acknowledgment from Congress of the moral crisis confronting those of low income and low wealth, and how they must address it as an emergency; a commitment to crafting and passing legislation reflecting the priorities of the Third Reconstruction Agenda;

a White House Poverty Summit with President Joe Biden and his commitment to an Executive Action Plan to Eliminate Poverty in 2022; nonviolent moral direct action in Washington in September with 5,000 poor and low-wealth individuals, religious leaders, and 100 economists; a 143-day voter registration and education plan; and a concerted effort to teach low-wealth voters how to harness their voting power.

Barber was clear about the task ahead. This event was just the beginning.