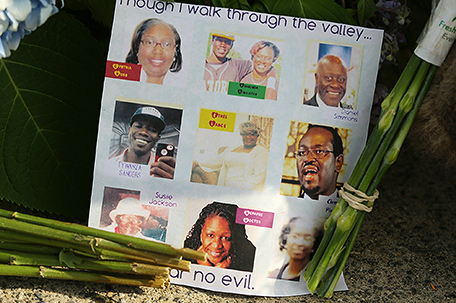 ABOVE PHOTO:  Makeshift memorial with photos of the nine who were killed at a memorial in front of the Emanuel AME Church on Friday, June 19, 2015 in Charleston, S.C. ( Curtis Compton/Atlanta Journal-Constitution via AP)

CHARLESTON, S.C. — Jury selection was halted before it began Monday in the federal case of a White man accused of fatally shooting nine Black parishioners, with the judge holding a hearing closed to everyone but the defendant and his own lawyers.

U.S. District Judge Richard Gergel opened the scheduled jury selection phase by saying he had received a request from the lawyers for Dylann Roof, 22, that required the judge’s immediate attention. Gergel did not say specifically what the attorneys wanted to discuss, saying only the request had to do with Roof’s right to a fair and impartial jury and trial.

Monday was to be the first day in what could be a multi-week process of whittling down a jury pool for Roof, who faces 33 federal charges including hate crimes and obstruction of religion, for the June 2015 shooting deaths at Emanuel AME Church in Charleston. The courthouse was teeming with news media, members of the public, and dozens of relatives of the shooting victims. 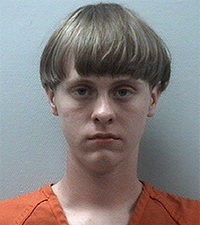 But at 9 AM, as the first panel of 10 juror candidates was set to be called in, Gergel said he had received a last-minute request for a hearing from Roof’s defense team. Saying juror selection for the day would be called off, Gergel read from the bench a statement saying he’d be holding a hearing from which prosecutors, reporters and the public would be excluded.

“The closing of the hearing is necessary to protect the attorney-client privilege and the defendant’s right to a fair and impartial jury,” Gergel said.

Several news media organizations argued that the hearing should be open or, at the very least, a recording or transcript of portions not related to attorney-client privilege should be made available. Gergel said he would consider releasing a redacted transcript but didn’t say when.

“Circumstances sometimes take over,” Gergel said. “If I had an alternative choice, I would have done it, believe me. … I cannot, at this point, imagine any reasonable alternative.”

Gergel said jury selection would resume on Wednesday. Court already had been canceled for Tuesday and Friday because of Election Day and Veterans Day, respectively.

The process is expected to take several weeks, with opening statements perhaps not coming until after Thanksgiving. The trial itself is expected to run into the new year and will be in two phases: to decide Roof’s guilt or innocence and, if he is convicted, to determine if he should be sentenced to life in prison or death. Roof faces a second death-penalty trial in state court next year.