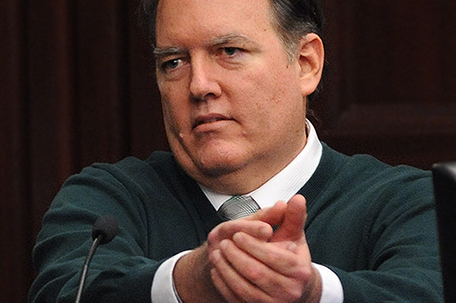 ABOVE PHOTO: Michael Dunn, gestures on the stand in his own defense during his trial in Jacksonville, Fla., Tuesday, Feb. 11, 2014. Dunn is charged with fatally shooting 17-year-old Jordan Davis after an argument over loud music outside a Jacksonville, Fla. convenient story in 2012. (The Florida Times-Union, Bob Mack, Pool)

Michael Dunn, 46, has written over 100 pages of correspondence while in a Florida jail awaiting trial on first-degree murder charges in the shooting death of 17-year-old Jordan Davis, letters which an attorney for Davis’ family call “shockingly racist,” reports News4Jax.com.

As previously reported by NewsOne, Dunn gunned down Davis at a gas station in Jacksonville, Florida on November 23, 2012. Dunn claims that he felt threatened by the teen — who was sitting inside of an SUV with friends — and loud music coming from the vehicle, so he shot inside of it eight or nine times before driving away leaving Davis to die in a friend’s arms.

None of the teens had weapons.

In one of the letters addressed to his “baby,” Dunn wrote:

The fear is that we may get a predominately black jury and therefore, unlikely to get a favorable verdict. Sad, but that’s where this country is still at. The good news is that the surrounding counties are predominately white and Republican and supporters of gun rights.”

In a letter addressed to his grandmother, Dunn claimed that all Blacks in jail acted like thugs:

“The jail is full of blacks and they all act like thugs. This may sound a bit radical but if more people would arm themselves and kill these (expletive) idiots, when they’re threatening you, eventually they may take the hint and change their behavior.”

In other letters he spoke about the district attorney trying to deny him the right to a “speedy trial” and all the boys in the SUV with Dunn being “thugs.”