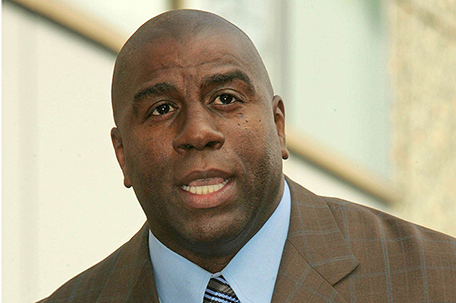 “He’s living in the stone ages,” Johnson said in an interview that aired Tuesday with CNN’s Anderson Cooper, a day after Sterling made his first public comments since racist recordings emerged last month and earned him a lifetime NBA ban. “You can’t make those comments about African-Americans and Latinos. You just can’t do it.”

In Sterling’s interview with Cooper, Sterling repeatedly brought up the ex-NBA star’s HIV and called him an unfit role model for children.

Johnson mostly avoided lashing back at criticism from Sterling, who at one point cut off Cooper’s listing of Johnson’s achievements to loudly say “He’s got AIDS!” Johnson, who is HIV positive but does not have AIDS, said he was surprised Sterling didn’t make the distinction.

“Here’s a man who you would think would be educated, and a man who is smart enough to build this type of wealth and own a team and have an incredible platform to change the world,” Johnson said. “But he’s doing it in a negative way.”

“I came out like a man, I told the world,” Johnson said of his famous public press conference announcing his retirement. “I didn’t blame nobody else. I understood what I did was wrong. And I hope that I was able to help people.”

Johnson, who said he has known Sterling since he first came to LA to play for the Lakers more than 30 years ago, said he didn’t know how he got stuck in the middle of a situation that should have been a personal dispute between Sterling and V. Stiviano. Stiviano recorded Sterling making racist comments about a photo of herself and Johnson on Instagram.

“He’s trying to find something to grab on to help him save his team,” Johnson said, “and it’s not going to happen.”

Sterling’s comments won him a quick and stinging rebuke from NBA commissioner Adam Silver, who said owners were working quickly to force Sterling out of the league.

On Tuesday his fellow owners in the league’s advisory/finance committee met via conference call, discussed the CNN interview and reviewed the status of the charge for termination of the Clippers’ ownership.

Silver or an owner has to formally charge Sterling in writing with violating Article 13 of the NBA’s constitution. A hearing would then be held and require a three-fourths vote of the board of governors to force Sterling to sell the team he has owned since 1981.

Clippers coaches and players, in Oklahoma City on Tuesday for their playoff series against the Thunder, were asked about Sterling’s latest comments, and most said they were doing their best to ignore them.

“I wasn’t looking for him to say anything, to be honest,” coach Doc Rivers said. “I was focused on our guys, and being above all that. He’s going to keep doing what he does, and we have to keep doing our jobs.”

Center Ryan Hollins said the team’s playoff success amid the constant controversy is “a tribute to Doc and the character of our guys.”

“I think we’ve always just had the mind-set of basketball first,” Hollins said.