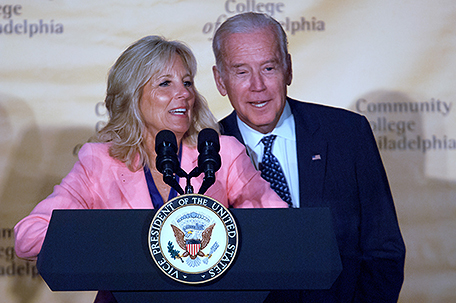 Flatiron Books told The Associated Press on Wednesday that it will release two books by Joe Biden and one by Jill. Joe Biden’s first book will “explore one momentous year,” when his son Beau died in 2015 and he decided against running for president. The memoir is currently untitled and no release date was announced. Flatiron, a Macmillan imprint, is calling the book “the story of not just a politician, but of a father, grandfather, friend and husband.”

“We’re so deeply honored to be the publisher of these books by Vice President and Dr. Biden,” Flatiron president and publisher said in a statement. “The Vice President’s book promises to give us all a deeper understanding of recent political history, but it will clearly also be a book about the values that have given the Vice President strength in both good times and bad.”

Flatiron did not provide details about the two other books it acquired or about financial terms. Two publishing officials with knowledge of negotiations said bidding went at least into seven figures. The officials were not authorized to discuss negotiations and asked not to be identified.

Beau Biden dies at 46; son of VP had life of adversity