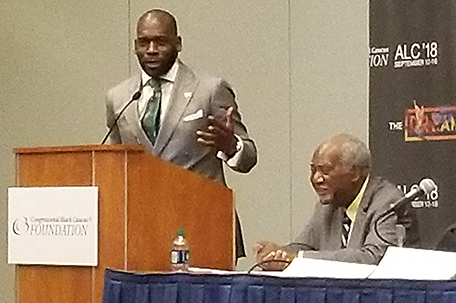 After they have served their time, returning citizens are faced with a number of obstacles. The adjustment period is full of daily challenges for them and the communities to which they return.

Different agencies, programs and nonprofits — many of which were founded and run by returned citizens themselves — are available to help.

Rev. Dr. Jamal Bryant, pastor of the Empowerment AME Church in Baltimore and one of the guest speakers, is committed to repairing the breach between the Black church and the community he feels they have failed.

As a result, Bryant was feeling pretty confident when after he and 3000 others formed a human prayer chain around the City Jail of Baltimore, the warden allowed him to come inside to preach to the inmates. The sermon was well received, yielding 300 religious conversions that day.

“I thought I was doing revolutionary, radical work, because of Baltimore’s seeing itself as an incubator of a prison pipeline,” Bryant said.

However, after the service concluded, the warden pulled Bryant to the side.

“The warden tapped me on the shoulder and said, ‘ Dr. Bryant, all that’s nice, and all that’s good, but I wanted to ask you, when these men get out of jail, whatcha got for them?’,” he recalled.

The question gave Bryant pause. He knew at that moment that if he truly cared about this population, he was going to have to offer more than prayers and Bibles. Permanent, sustainable solutions were needed.

As a result, Bryant’s church instituted programs that address home ownership, credit repair, transportation, entrepreneurial assistance and training for jobs in the technology sector, including coding.

Panelist Eric Weaver is program deputy director of DC Department of Corrections Portal of Entry and founder of the National Association of Returning Citizens (NARC).

Weaver established NARC as a 501c4 in order to be able to advocate for returning citizens in the political arena. Policy decisions from the local through to the federal level affect this population deeply.

“I like to say that we educate, organize and mobilize the returning citizen population here in D.C.,” he said “I’m a returned citizen myself. I went to jail at 17 and came home at 39. I’ve been home nine years now. Some of the things we’ve got to look at what laws are in place, what’s working and what isn’t working.”

Weaver also stressed that in order for people to be able to take full advantage of viable, well-paying employment opportunities upon reentry, training and education needs to start while people are still in prison.

Panelist Hayne Yoon of the VERA Institute of Justice also spoke about the importance of post- secondary education and of the challenges faced since the 1994 Crime Bill ended these programs in prison. Former President Obama attempted to restart the process with the Second Chance Pell Pilot Program, but much more is needed.

“We received a grant from the Department of Commerce, Employment and Economic Opportunity (DCEO) which we called the Talent Pipeline” said Charles Wilson, director of workforce development and safety for the Associated Builders and Contractors of Illinois. “The intent behind this was to “pipeline” more people of color, women, returning citizens and veterans into careers in the construction industry. During my tenure, I’ve taken that grant and given it a [new] name called “Community Builders.”

Apprenticeship programs exist in his region, but are often located far from public transportation, so Wilson has brought the programs to targeted communities, partnering with other organizations and renting out space. People within those communities can become credentialed in the trades that Community Builders has identified as being the most in demand: plumbing, HVAC, electrical and carpentry.

“Here’s what we always hear [from potential employers] – ‘we can’t find the talent’,” he said. “My job has been [to be able to respond] ‘let me remove the excuse, then.’”

All the panelists agreed that returning citizens — especially women — need comprehensive holistic wraparound services, including childcare, affordable housing that is suitable for families, relocation, counseling, job and entrepreneurship training and more in order to be successful and to avoid recidivism. All are dedicated to making sure they get those services.

“We keep the advocacy going, and we’ve seen results happening,” Rep. Davis said at the end of the session. “I’ve heard some program ideas that if I was in the business of running programs, I would latch on to some of them and go back and start one in my neighborhood.”