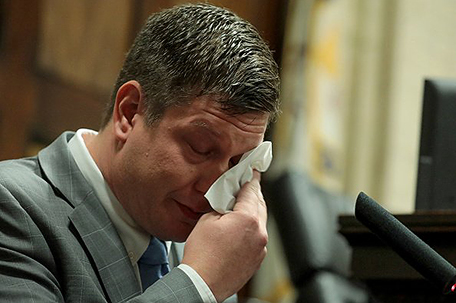 Most of the 12 jurors met with reporters last Friday shortly after taking less than eight hours of deliberation to find Van Dyke guilty of second-degree murder and 16 counts of aggravated battery, The New York Times reported.

In a rare move, Van Dyke took the stand on Tuesday and spun a tail to justify the 16 shots he fired at McDonald on Oct. 20, 2014. The former officer, who’s White, cried on the witness stand, as he contradicted video evidence that showed him firing at McDonald when the teen turned away from the officers.

“It seemed kind of like he was finally giving the play after they had been rehearsing with him for weeks,” said a White woman juror, who noticed VanDyke “staring at us, trying to win our sympathy” when he testified.

“We just didn’t buy it,” the unidentified juror added.

On the evening of the incident, officers received a complaint about a suspect trying to break into vehicles, according to police officials. Two officers followed McDonald in their patrol car before calling for a backup officer who was equipped with a Taser. Van Dyke, one of the backup officers who arrived, allegedly got out of his vehicle with his gun drawn and started shooting.

Van Dyke claimed on the witness stand that McDonald kept “advancing” at him waving a knife, so he had to keep firing until the teenager fell to the ground. However, police dashboard camera video shows McDonald walking away when Van Dyke fired 16 bullets at him, continuing to fire even after the teen hit the ground.

At first, the jurors were not unanimous about Van Dyke’s guilt on the original poll. Seven jurors leaned toward guilty, two leaned toward not guilty and another three were undecided.

However, the initial disagreement over guilt and innocence moved quickly by Friday morning to whether they should convict Van Dyke of first- or second-degree murder.

After about two and a half hours of deliberating, jurors settled on second-degree because they were convinced that Van Dyke thought he was acting unlawfully.

Jurors to visit scene of police shooting as trial begins