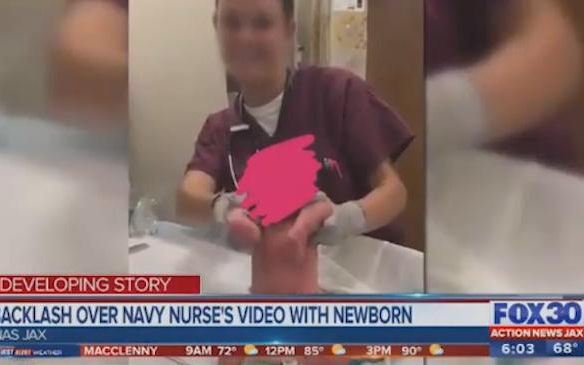 Two Jacksonville, Fla. nurses have been relieved of their duties after video footage of them making an newborn baby “dance” to rap music.

The women took to Snapchat to not only record the ridiculousness but to also label the infants “mini Satans.”

In the footage a woman is seen holding up her middle finger at the baby, who is believed to be just a few hours old. The caption accompanying the footage said, “How I currently feel about these mini Satans.”

It didn’t take very long for the images to go viral, and soon, the two Naval Hospital nurses were suspended. In the video, one of the women can be heard saying, “We’re going to hell” as a nurse holds a baby by the arms and moves the infant to the sound of 50 Cent’s “In Da Club.”

“We have identified the staff members involved. They have been removed from patient care, and they will be handled by the legal system and military justice,” a message posted to the hospital’s Facebook page read. “It’s outrageous, unacceptable, incredibly unprofessional, and cannot be tolerated.”

The hospital also said it was in the process of notifying the patient’s parents.