Is anyone happy with their local schools? 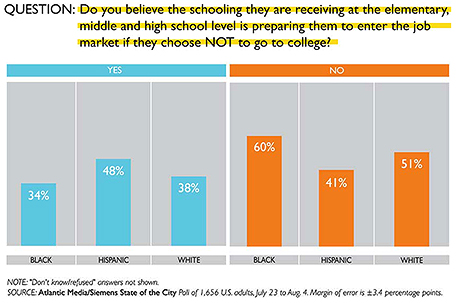 Hispanics largely are, but African Americans aren’t, according to the State of the City Poll

This week marks back-to-school for many U.S. students, and for the first year ever, minorities—Hispanics, Asians, African-Americans, Native Americans, and multiracial individuals—will outnumber whites in the classroom.

But that demographic shift hasn’t necessarily translated into a new balance of opportunity. The Department of Education’s recent look at civil rights issues in American public schools revealed harsh racial divides in terms of opportunity and access. One example: just 57 percent of black students, and 67 percent of Hispanics, attend high schools that offer a full range of advanced math and science courses. That was compared to 71 percent of whites.

And according to the Atlantic Media/Siemens State of the City poll, many Americans—especially African Americans—have no trouble perceiving those disparities. Interviews conducted earlier this summer with 1,656 adults across the United States revealed marked differences in how white Americans and Americans of color view local educational opportunities for young people.

“Schools [here] don’t represent the significance of college enough,” says Ray Jones, a 50-year-old real estate agent in suburban Indiana. “Kids are living for the moment, and schools should be helping them think ahead.”

Jones, who is black, told pollsters he did not believe that children in his neighborhood are getting an education that sufficiently prepares them for college. He shares that view with 45 percent of African Americans surveyed, compared to 36 percent of whites that felt the same way.

The outlier was among Hispanics, 65 percent of whom felt local schools are doing a good job of preparing local kids for college. “I’ve seen how teachers go the extra mile to help,” says Evita Cruz, a 33-year-old community leader in Austin, Texas. “My child’s teacher has been coming in on weekends out of the goodness of her heart to help her get better at math.”

Cruz also pointed to the wealth of after-school programs in her local elementary and middle schools as evidence that institutions are preparing students to enter the workforce, even if they choose not to attend college. Again, Cruz shared that view with 48 percent of Hispanics. But just 34 percent of blacks, and 38 percent of whites, felt their local schools were laying solid foundations for graduates entering the job market.

“They used to teach welding to the young men in our area,” says Sarah Williams, a 75-year-old African American retiree in suburban Mobile, Alabama. “I don’t see much of that that anymore.”

When it came to the availability of high-quality higher education, disparity in opportunity was not only a matter of race, but also of geography. Asked about whether high-quality colleges or vocational schools were locally available, blacks and Hispanics had more closely aligned opinions—58 percent of blacks and 53 percent of Hispanics felt such schools were available where they lived.

Across the board, survey respondents believed that their local schools needed improvement. Fully 56 percent of those surveyed thought that increased local government spending on public schools would have a major impact on the overall quality of life where they live—more than any other spending option. And of any group, African Americans (72 percent) felt most strongly that investing in education would benefit their area.

To that end, Williams has hope. She described with great pride the computer lab at her grandson’s elementary school, in a distant, larger town. Children in her area, however, don’t seem to have those kinds of resources, she says—yet.

“There’s not much here now,” Williams says, “but we’ll get there one day.”

The Atlantic Media/Siemens State of the City Poll, conducted by Princeton Survey Research Associates International, surveyed 1,656 U.S. adults by telephone between July 23 and August 4. It has a margin of error of plus or minus 3.4 percentage points.