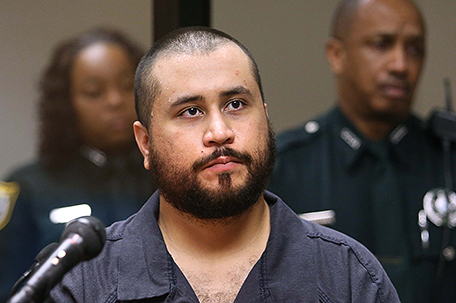 ORLANDO, Fla. — George Zimmerman became angry and threw a wine bottle at his ex-girlfriend when she tried to break up with him, according to a police report released Monday.

Zimmerman denied throwing the bottle and disputed her claim that he destroyed her cell phone last week, according to the report, which chronicles his latest run-in with police since he was acquitted of murdering Trayvon Martin in 2013. The killing of the unarmed black teen touched off protests across the country.

Instead, Zimmerman said, he was only trying to prevent her from entering his home.

The former neighborhood watch volunteer was arrested Friday in Lake Mary and charged with aggravated assault. He was released Saturday on $5,000 bond.

Zimmerman didn’t respond to a message left on his cell phone Monday by The Associated Press.

Officers patrolling the neighborhood where Zimmerman lives last week heard the sound of glass shattering, and then saw the former girlfriend drive out of the driveway. They pulled her over for a traffic stop a few streets over because she didn’t have her lights on.

She explained that Zimmerman became angry after she told him she didn’t want to take the relationship further, and they also argued over a painting she had that he wanted returned. Zimmerman made threats and threw the wine bottle, which didn’t hit her, she said.

Detectives described her as “extremely emotional, crying, mad and upset” and said she became reluctant to cooperate when she realized that officers might be conducting an investigation. She called her former boyfriend “that psycho, George Zimmerman” and said several times that she should have known better than to get involved with him.

The ex-girlfriend, whose name is redacted, told investigators that she had had an “intimate relationship” with Zimmerman since the end of last year.

“She indicated that this began at a time when she was emotionally vulnerable,” the report said.

Zimmerman was arrested at his house on Friday, four days after the confrontation. Detectives said in the police report that he refused to come to the door for more than two hours despite their repeated knocking. They said they could hear the television on and a dog barking.

Zimmerman eventually came outside after police officers agreed to allow him to keep his attorney on his cell phone with him while he was interviewed, the report said.

Zimmerman was acquitted in 2013 of a second-degree murder charge for shooting Martin in a gated community in Sanford, Florida. The Justice Department has yet to say whether it will file federal civil rights charges against Zimmerman, who said he shot Martin in self-defense during a confrontation in February 2012. Relatives of Martin accused Zimmerman of racially profiling the teen.

Since his acquittal in the Martin case, Zimmerman has had several brushes with the law:

•  He was arrested on charges of aggravated assault, battery and criminal mischief after his then-girlfriend said he pointed a gun at her face during an argument, smashed her coffee table and pushed her out of the house they shared. Samantha Scheibe decided not to cooperate with detectives and prosecutors didn’t pursue the case.

•  Zimmerman was accused by his estranged wife of smashing an iPad during an argument at the home they had shared. Shellie Zimmerman initially told a dispatcher her husband had a gun, though she later said he was unarmed. No charges were ever filed because of a lack of evidence. The dispute occurred days after Shellie Zimmerman filed divorce papers.

•  Zimmerman has also been pulled over three times for traffic violations since his acquittal.

iPad video could be key in George Zimmerman case