In a change from 2008, Clinton talking often about race 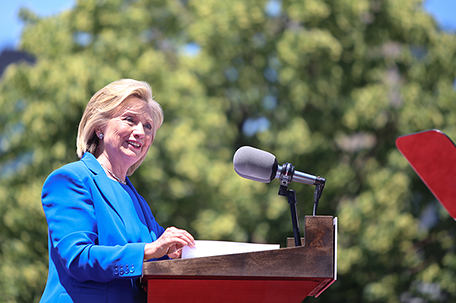 GREENVILLE, South Carolina — In her second bid for the presidency, Hillary Rodham Clinton is discussing “systemic racism” and making the issue a hallmark of her campaign, as she looks to connect with the black voters who supported rival Barack Obama in 2008.

At multiple stops in South Carolina this week, the former secretary of state and current Democratic front-runner in the 2016 presidential campaign bemoaned “mass incarceration,” an uneven economy, increasingly segregated public schools and poisoned relations between law enforcement and the black community.

The former first lady praised South Carolina leaders, including Republican Gov. Nikki Haley, for removing the Confederate battle flag from statehouse grounds after a white gunman’s massacre of nine people at a historic black church in Charleston, but she warned that the act is only symbolic.

“America’s long struggle with racism is far from finished,” she said before a mostly white audience at a Greenville technical college. Hours earlier, with a majority black audience at a West Columbia church, she declared, “Anybody who says we don’t have more progress to make is blind.”

The bold approach, which also includes previous addresses on voting rights and the criminal justice system, is a contrast to her 2008 campaign, when she didn’t talk so directly about race as she faced off against Obama, who would go on to become the nation’s first black president. Instead, she ran as the battle-tested, experienced counter to the first-term U.S. senator from Illinois.

Clinton doesn’t frame her unabashed commentary in a political context; aides repeatedly explain her strategy as “working to win every vote” and nothing more. Yet it’s clear that Clinton feels no constraints, as perhaps she did eight years ago. It’s also no surprise that she prominently features the strategy in South Carolina. African-Americans make up about 28 percent of the population and a majority of the Democratic primary electorate, the first of the early-voting states to feature a significant bloc of black voters.

Obama trounced Clinton here in 2008, 56 percent to 27 percent, as many black voters flocked to his candidacy once he demonstrated white support in the Iowa caucuses and New Hampshire primary. That leaves Clinton to reverse a bitter primary defeat, while using South Carolina as a test run for a potential general election in which she would need strong black support to reassemble Obama’s coalition in states like Virginia, Florida and Ohio.

If Clinton’s approach is born of necessity, it also comes with potential pitfalls.

The complexities were clear within hours of her South Carolina stops, as social media users and commentators parsed her comments, including her statement that “for a lot of well-meaning, open-minded white people, the sight of a young black man in a hoodie still evokes a twinge of fear.” She made the observation that racism goes beyond public policy and into “the fabric of how people think and feel and act.”

Last month, she angered some activists by using the phrase “all lives matter” during a speech a few miles from Ferguson, Missouri, where Michael Brown died at the hands of a white police officer. Clinton used those words as part of an anecdote about her mother, whom she said taught her that “all lives matter,” but some activists thought it demeaned the significance of the “Black Lives Matter” effort.

Clinton also faces questions about her advocacy for tougher sentencing laws that her husband signed as president. Bill Clinton recently expressed regret over the laws, but his wife stopped short of calling the laws a mistake.

“We were facing different problems in the ’80s and ’90s,” she told reporters, saying crime in cities “was causing an outcry across the nation,” including in minority neighborhoods. “I think now, 20 years on, we can say some things worked and some things didn’t work,” she continued. “One of the big problems that didn’t work is that we had too many people, particularly African-American men, who were being incarcerated for minor offenses.”

Clinton also must avoid any residue from Bill Clinton’s remarks during the 2008 campaign. After Obama won South Carolina, the former president, who remains very popular among black voters, dismissed the victory as akin to Rev. Jesse Jackson’s victory in 1988. A black South Carolina native, Jackson won the state’s caucus that year, but didn’t sustain the momentum.

Obama plays the race card, and there’s nothing wrong with that