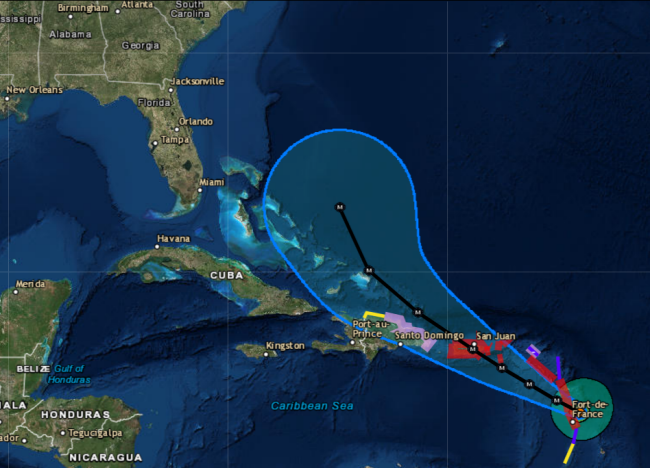 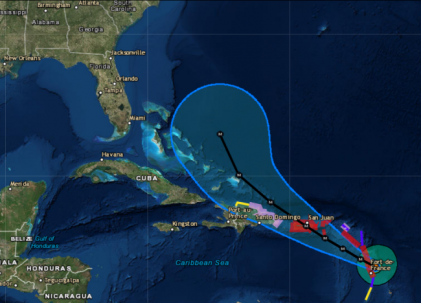 Hurricane Maria has developed into a powerful Category 4 storm that’s likely to hit some of the same Caribbean islands recently devastated by Hurricane Irma.

Maria’s sustained winds of least 130 mph make it a Category 4 storm as of 5 p.m. ET, and it’s still rapidly intensifying. The National Hurricane Center declared Maria a major hurricane, defined as a Category 3 storm or above, earlier Monday.

The hurricane is approaching the Leeward Islands with a track that threatens to bring its center quite close to Dominica and Martinique on Monday evening. The US island of Puerto Rico appears to be directly in Maria’s path, with the Virgin Islands also projected to be near the storm’s eye.

Air Force “hurricane hunter” flights report that Maria could be close to Category 5 strength before the system arrives in Puerto Rico by Wednesday.

It’s still too soon to say whether Florida or other parts of the continental US will be in the storm’s path after it crosses the Caribbean. For now, at least, it looks as though Maria will turn north before reaching Florida.

Hurricane warnings are currently in effect for the British and US Virgin Islands, Puerto Rico, Culebra, Vieques, Guadeloupe, Dominica, Martinique, St. Kitts and Nevis, and Montserrat. Those islands are likely to see hurricane conditions within the next 36 hours. Tropical storm warnings are in effect for Anguilla, Antigua and Barbuda, Saba, St. Eustatius, St. Lucia, and Sint Maarten.

Hurricane watches — meaning hurricane conditions are possible within the next two days — are in effect for Saba, St. Eustatius, St. Martin, St. Barts, Anguilla, and parts of the Dominican Republic.

The NHC may issue additional watches and warnings on Monday night or Tuesday.

Bracing for a storm

The latest forecast says Maria is expected to be “an extremely dangerous major hurricane during the next couple of days.”

Dominica is bracing for what could be a direct hit from the storm. The last and only other Category 4 storm to directly hit the island nation, Hurricane David in 1979, killed more than 50 people and left 60,000 homeless.

Preparations for Maria have begun in Puerto Rico, where many are still recovering from Hurricane Irma. The island avoided a direct hit from that storm, but Irma’s powerful storm surge and winds still caused many residents to lose power. In the Virgin Islands, the soldiers who arrived to provide relief after Hurricane Irma have been evacuated.

I can’t possibly stress this enough: If you have friends or family in Puerto Rico, please get in touch.
Maria will be much worse than Irma. https://t.co/lTEUFh2E0j

Puerto Rico declared a state of emergency on Monday, activating the National Guard to help the island prepare. On St. Thomas and St. John in the Virgin Islands, residents have been urged to leave their homes for government shelters, since Irma damaged many homes.

“Take this event seriously,” Gov. Kenneth Mapp of the US Virgin Islands said at a press conference Sunday. “You cannot stay in those facilities. You will not survive.”

He urged people who decided to stay in their homes to write their Social Security numbers on their bodies so they could be identified easily in a worst-case scenario.

Waters are expected to reach 6 to 9 feet above normal levels if the storm surge arrives at high tide in Puerto Rico and the Virgin Islands. Total rainfall in the Virgin Islands is expected to be between 10 and 15 inches, with isolated areas receiving 20 inches. In Puerto Rico, rainfall is estimated to be 12 to 18 inches, with isolated areas receiving 25 inches.