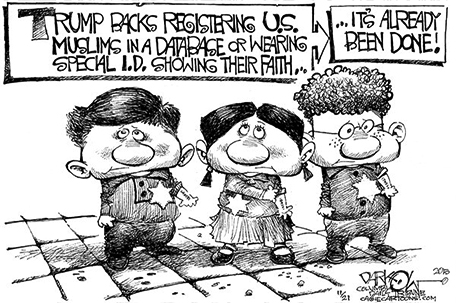 The instant the news broke about the hideous bloodbath in Paris, tweets from the conservative echo chamber came fast and furious. They called for a total, all-out war, bashed immigrants, gun control advocates, liberals, President Barack Obama, lax security and, of course, Muslims.

At that point, not one of the attacker’s identities had been confirmed, no motive was given for the attack, and no group had claimed responsibility for it. Even after ISIS claimed the bloodbath as its handiwork, officials had still not confirmed the truth of ISIS’s claim. And countless Muslim organizations, as well as governments including Iran, denounced the attack. It made no difference. The brutal finger pointing was in full swing.

By contrast, when Obama denounced the attack, he called for greater vigilance and aggressiveness against terrorism. He did not say “Islamic terrorism.” The shrill conservative echo chamber grew even louder. But Obama’s care in putting the blame and the action needed in the right place, and not on all Muslims or immigrants was the type of caution and restraint needed at a time when the witch-hunt against Muslims was again cranking up.

The right-wing’s manic desire to turn every horrific and bloody terror attack into a political vendetta against immigrants and Muslims may be an old script, but it’s a serviceable one; partially because there are just enough real terror cells and individuals who are willing to commit mass murder and mayhem. Jumping on the anti-Muslim bandwagon when terrorists strike fans anti-immigrant fear and hysteria. This has been a trump card for legions of GOP demagogic, fear mongering officials and candidates. GOP presidential candidate Donald Trump is only the latest in a long line.

Even before the Paris massacre, there was evidence that immigrant and Muslim bashing would be back on the GOP political table. Trump milked it for maximum worth to garner headlines, massive media attention, and a poll ratings bonanza. The Paris massacre has the potential and the danger to up the ante even more.

The pressure is heavy on both Democratic presidential candidates and Obama to take an even harder line on the Middle East conflicts. It won’t just be ISIS that will be the focal point of any stepped up American offensives. Muslim groups in this country could draw even greater scrutiny, including increased surveillance and monitoring. When homegrown terrorist Timothy McVeigh blew up the Oklahoma City federal building in 1996, the predictable happened. By week’s end, according to the Council on American-Islamic Relations, there were more than 200 physical and verbal attacks against American Muslims, which included the burning of three Islamic mosques and community centers.

A full-blown domestic anti-Muslim witch-hunt was brewing at the time. But President Bill Clinton and Attorney General Janet Reno did not rush to judgment and scapegoat Arabs. The swift arrest of McVeigh squelched the building mob hysteria against them. President George W. Bush, like Clinton, in his first public words after the terror attack on the World Trade Center and the Pentagon, did not reflexively finger-point Arab terrorists. He took great pains to publicly rebuke the acts of harassment or violence against American Muslims and Sikhs in some cities. This did much to prevent wholesale acts of violence against Muslims.

This was also the case following the Boston Marathon bombing in 2013. Public anger and passions were running hot. Muslims were again under intense fire and the clamor was loud for a big crackdown. But Obama and then Massachusetts Governor Deval Patrick did not overreact. They damped down the furor and again made clear that the terror attack was the work of individuals and they would be the ones hunted down. And once they were apprehended their civil liberties and legal due process would be fully protected. Both were careful not to give any hint that the heinous act had anything to do with Islam or the sentiment of Muslims in this country. They, in effect, played a reasoned, responsible, and decisive role in heading off any anti-immigrant or anti-Muslim backlash to the violent acts of a few.

The Paris massacre was shocking and horrific. It, as all terror attacks do, caused untold personal pain and suffering. But the truth is that the overwhelming majority of Muslims from war-torn countries are working hard to rebuild their shattered lives. They have been among the first to loudly denounce the despicable acts of those who sully Islam by committing abominable acts. The message is, and must always be, to hunt terrorists, not to witch-hunt Muslims.

Earl Ofari Hutchinson is an author and political analyst. His latest book is ‘What to Make of Ben Carson’ (Amazon Kindle). He is a frequent MSNBC contributor. He is an associate editor of New America Media. He is a weekly co-host of the Al Sharpton Show on Radio One. He is the host of the weekly Hutchinson Report on KPFK 90.7 FM Los Angeles and the Pacifica Network