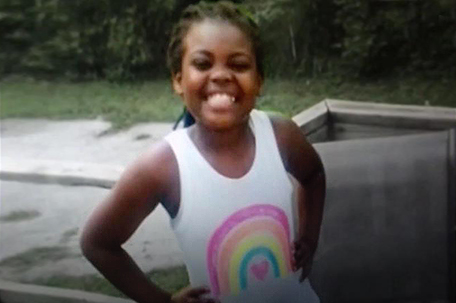 ST. LOUIS — Hundreds gathered to remember a 9-year-old girl who was killed when shots were fired into her Ferguson home as she did homework on her mother’s bed.

Sobs grew audible and tissues were passed down the aisles as fourth-grade classmates of Jamyla Bolden sang in front of her casket Saturday, the St. Louis Post-Dispatch reported. The shooting Aug. 18 in the St. Louis suburb also left Jamyla’s 34-year-old mother wounded. After searching more than a week, authorities charged a 21-year-old O’Fallon man with second-degree murder and several other felonies.

The pastor at Friendly Missionary Baptist Church told Jamyla’s family as the funeral began that the shooting has “wounded” the whole community, region and country.

“We dare not say we experience it in the same way as you,” the Rev. Michael Jones added.

“We say go to school, get an education … she tried to do all of that,” former Missouri Rep. Betty Thompson said after the service.

Lillie Vinson, a longtime friend of Jamyla’s great-aunt, said it seemed like the community worked well with the Ferguson Police Department and its new interim chief, Andre Anderson, to try to solve the crime.

“I hope we just stop all of this senseless shooting,” Vinson said before the funeral began. “Enough is enough.”

Officer Greg Casem told the gathering how he held Jamyla as she was dying and told her to “hold on.”

“I watched the ambulance speed away, and I felt lost,” he said, overcome with emotion. “You have touched the heart of the entire nation.”

The church played a video during the service that featured St. Louis Cardinals President Bill DeWitt III asking the community to pray for Jamyla and justice. He and his wife, Ira, paid for the family’s funeral expenses.