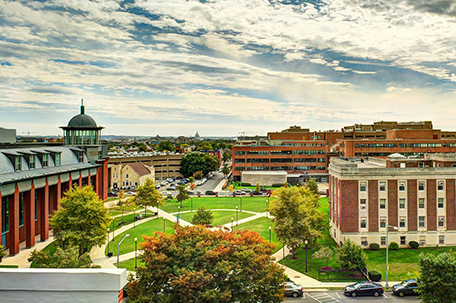 By Imani Fox and Kishana Flenory

Howard University students reeled with excitement in reaction to the news that President Barack Obama will deliver the address for their May 7 commencement.

“We were freshmen in high school when he first got elected and we were freshmen in college when he got re-elected.,” said graduating senior Jeremiah Jones. “So, we were a part of his legacy in the eight years he led the United States.”

The film production major said he could hardly believe it when he first got the news through social media. But then the university made the official announcement.

Howard University President, Dr. Wayne A. I. Frederick announced Obama’s visit in a statement issued to students and employees.

“It is an extraordinary honor and privilege for the Howard University community to welcome President Barack H. Obama to our campus to deliver the 2016 commencement address,” Frederick said “The president’s commitment to education, especially for those who can least afford it, dovetails with Howard’s commitment to provide these same students with a rigorous, intellectually-stimulating, and academically-challenging educational experience.”

Frederick said the event will impact Howard far beyond the commencement.

“As we look into the not so distant future, Howard will commemorate its 150th anniversary in March 2017, emboldened by a legacy of addressing disparities that are inextricably intertwined with this nation’s legacy of equality and inclusivity,” he said. “President Obama’s own legacy gives the Howard community great expectations for the leadership footprint it will leave on America and the globe.”

Makaela James, a senior public relations major, said with this also being the president’s last full year in office, it gives the moment an even greater significance to hear one of his final speeches. “This is actually very historic,” James said.

Abigail Idokogi, a senior majoring in clinical laboratory sciences, said she was beginning to feel as though her senior year was a “flop.” The events she had looked forward to ended up either being cancelled or not being as fun as she expected them to be.

“I was beginning to feel like my entire senior year was lackluster, but this was like the cherry on the top of a cake that already didn’t have any icing on it,” Idokogi said. “This is finally Howard’s opportunity to give me the parting gift I deserve after all the stress.”

The White House announcement gave a special nod to Howard.

“As one of the nation’s top Historically Black Colleges and Universities, Howard University is recognized for its rigorous education and legacy of building lasting bridges of opportunity for young people,” it said.

Howard law student Lindsey Parker said the announcement has not just excited graduating seniors, “but the families of these students, faculty and under classmen are also very eager.”

“Before I found out the news, my mother and other family members continued sending me text messages of the exciting news,” Howard said.

She said she never would have thought that the president of the United States would be delivering her commencement speech.

Wilson said he won’t be graduating yet, but “I’ll be out there celebrating with my peoples.”

Not everyone was surprised.

Tré Clayton, a senior finance major said Obama and first lady Michelle Obama as well as other members of his administration “were already committed to speaking at HBCU’s. Howard University was the last major tier left.”

Still, Clayton said, it is special.

“This is surreal, because I grew up with the president leading my country…,” he said. “One of his last speeches as president will be geared toward my cohorts and I, preparing us for the real world.”

For some, the fact that Obama is the nation’s first Black president makes the occasion even more significant.

“This announcement has been a long time coming,” Hayes said.  “HU16 prayed for this and our prayers were answered. We are truly the greatest class of all time.”

Imani Fox and Kishana Flenory are reporters with the Howard University News Service.