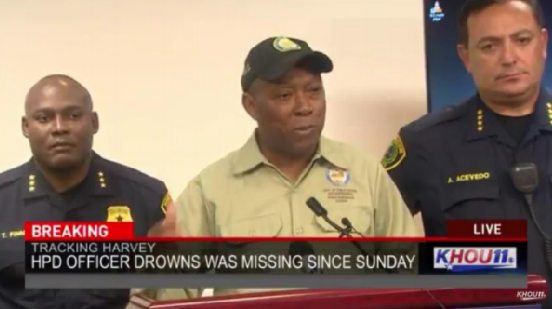 Houston, Texas—A Houston police officer has died while trying to reach the police station during the floods from Hurricane Harvey.

Sergeant Steve Perez who worked in traffic enforcement drowned in Houston while driving through an underpass during the floods. His body was recovered Tuesday said Police Chief Art Acevedo during a press conference.

On Sunday August 27, Sergeant Perez spent two and a half hours trying to get his police station. He called in to his lieutenant command to inform them that he could not find his path due to the rain. He attempted to drive to the secondary police location which is in Kingwood.

On Monday, August 28, station personnel noticed that Sgt. Perez was not present during the roll call. His colleagues and superiors were also unsuccessful in attempts to contact him.

Houston police then contacted Sgt. Perez’s wife and she advised that she had not seen her husband since 4 a.m. on Sunday.

A crew was sent on Monday to search for Perez, however the floods were too treacherous to search for him.
Police then returned to continue the search, however, this time as a recovery mission with divers.

The dive team recovered his body said Chief Acevedo as his voice trembled delivering the news to reporters.
“If it was his turn to go. This is the way he wanted to go, doing what he’s done for 34 years,” continued Acevedo.
“We look forward to giving this man the honor he deserves at his funeral.”

Sgt. Perez passed away two days before his 61st birthday.