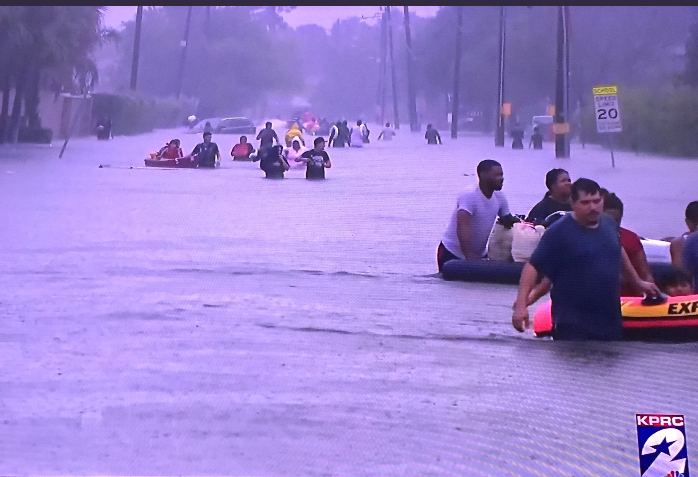 Houston (AP)–Many of the people that are arriving at the George R. Brown Convention Center, which has been opened as a shelter for people fleeing flooding, are from a public housing complex about a mile north.

Clayton Homes public housing complex is bounded on one side by Interstate 45 and the other by Buffalo Bayou, which has flooded heavily along with all of Houston’s major waterways. Police are using boats to evacuate many of the residents and bring them to the convention center in pickup trucks.

D’Ona Spears and Brandon Polson walked with their five children Sunday, bags full of belongings, and their 7-year-old Chihuahua, Missy. They decided to leave once the water in the first story of their home reached their knees.

Spears says that when they made it to the convention center, they sent their children inside to eat, but stayed outside with their Chihuahua because animals were not allowed inside.

Houston Mayor Sylvester Turner announced earlier Sunday that the convention center would serve as a shelter for people fleeing the flooding.

Earlier this afternoon, Harris County Judge Ed Emmett says that Ben Taub Hospital, the county’s public hospital, is being evacuated because flooding problems in the basement are disrupting power service.

Emmett overseas government operations in Harris County where Houston is located. He tells a news conference that evacuated patients are being taken to other area hospitals. It was not immediately known how many patients were being moved.

In a conference call Sunday with reporters, Oditt says Coast Guard personnel and aircraft from around the country have been dispatched to Texas. He says Texas Air National Guard choppers were also assisting with rescues.

Oditt says people facing rising floodwaters should not go into attics, since rescuers in the air cannot see them. The incident commander urged people who head to their rooftops to wave sheets, towels or anything else to attract the attention of helicopter crews.

Coast Guard helicopter crews along the southern portion of the Texas coast are reporting the rescue of almost 40 people, starting from the morning before Hurricane Harvey made landfall. That includes six people rescued from their home Saturday evening in the hard-hit city of Aransas Pass. Among them were three children, their two parents and an elderly woman who was in need of oxygen.