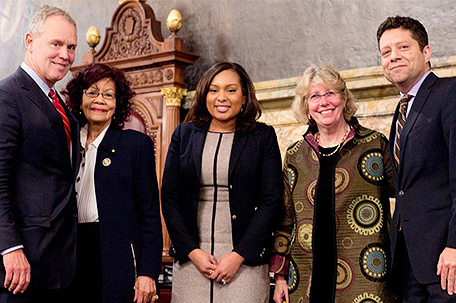 ABOVE PHOTO:  Rep. Louise Williams Bishop and House Speaker Mike Turzai along with family members of Julian Abele and executives from the Philadelphia Museum of Art. The House unanimously adopted Bishop’s resolution, honoring Abele. He was the first African-American architectural student and designer of the Philadelphia Museum of Art, among other buildings throughout the United States.

HARRISBURG– A resolution sponsored by state Rep. Louise Williams Bishop, D-Phila., honoring the first African American architectural student and designer of the Philadelphia Museum of Art was unanimously adopted last week in the House of Representatives.

Julian Abele was born in Philadelphia in 1881 and became the first African-American graduate of the architecture program at the University of Pennsylvania.

Bishop said in addition to creating the design for the Philadelphia Museum of Art, Abele also designed the Free Library of Philadelphia, the Land Title Building, and buildings on the campus of Duke University in North Carolina, as well as many other buildings across the United States.

“Abele’s vision not only changed the skyline of Philadelphia, but also much of our nation,” Bishop said. “I thank my colleagues for adopting my resolution to honor a man who received little recognition during his lifetime, despite his many important contributions.”

Officials with The Philadelphia Museum of Art said Abele’s story is one of profound inspiration and achievement.

“We are honored at the museum to be the beneficiary of Abele’s artistic vision, so beautifully expressed in his own hand, in the exquisite architectural renderings that led to the museum’s iconic building,” said Gail Harrity, president and chief operating officer, the Philadelphia Museum of Art.  “It’s a story that contributes greatly to our pride in the museum, and indeed the pride we feel for our great city.”

Bishop added it wasn’t until the 1980s when Abele’s role in creation of the campus of Duke University was made public. His portrait hangs in one of the buildings that he designed.