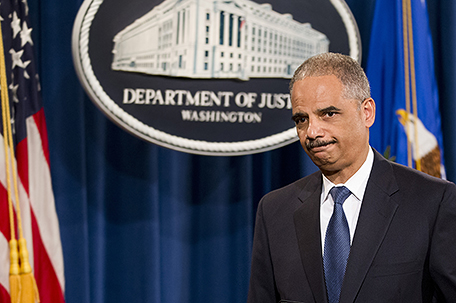 Holder traveled to Atlanta to meet with law enforcement and community leaders for the first in a series of regional meetings around the country. The president asked Holder to set up the meetings in the wake of clashes between protesters and police in Ferguson, Missouri.

“In the coming days, I will announce updated Justice Department guidance regarding profiling by federal law enforcement. This will institute rigorous new standards – and robust safeguards – to help end racial profiling, once and for all,” Holder said. “This new guidance will codify our commitment to the very highest standards of fair and effective policing.”

Tensions between police and the community in Ferguson boiled over into violent confrontations in August after a white police officer shot a black teenager. Protests turned violent again last week after a grand jury declined to indict officer Darren Wilson in the death of 18-year-old Michael Brown.

The meeting came on the heels of President Barack Obama’s request to federal agencies Monday for recommendations to ensure the U.S. isn’t building a “militarized culture” within police departments. The White House also announced it wants more police to wear cameras that capture their interactions with civilians. The cameras are part of a $263 million spending package to help police departments improve their community relations.

The selection of King’s church as the site for the meeting was significant. The most successful and enduring movements for change adhere to the principles of non-aggression and nonviolence that King preached, Holder said.

“As this congregation knows better than most, peaceful protest has long been a hallmark, and a legacy, of past struggles for progress,” he said. “This is what Dr. King taught us, half a century ago, in his eloquent words from the Ebenezer pulpit and in the vision he shared from the steps of the Lincoln Memorial.”

While the grand jury has made its decision, the Justice Department continues its investigation into the death of Brown and into allegations of unconstitutional policing patterns or practices by the Ferguson Police Department, Holder said to loud applause.

Holder also told the crowd that the meetings he’s convening around the country are just the beginning and that he wants to start a frank dialogue and then translate that into concrete action and results.

Holder’s comments were well-received by the audience. When a group of people interrupted his speech with chants and was escorted out, Holder applauded their “genuine expression of concern and involvement” and got a standing ovation from the crowd.

Holder, who plans to leave the position once a successor is confirmed, has identified civil rights as a cornerstone priority for the Justice Department and speaks frequently about what he calls inequities in the treatment of minorities in the criminal justice system. He has targeted sentences for nonviolent drug crimes that he says are overly harsh and disproportionately affect black defendants and has promoted alternatives to prison for non-violent offenders.

Last year, as part of the Justice Department’s “Smart on Crime” initiative, he instructed federal prosecutors to stop charging many nonviolent drug defendants with offenses that carry mandatory minimum sentences – punishments that he said were contributing to overcrowded prisons. The Justice Department has also broadened the criteria for inmates seeking clemency in hopes of encouraging potentially thousands more inmates to apply, and Holder backed changes in federal sentencing guideline ranges that could result in tens of thousands of drug prisoners becoming eligible for early release.

Holder also has publicly discussed the need to ease tensions between police departments and minority communities. The Justice Department has also targeted flawed police departments, initiating roughly 20 investigations of local police agencies – including Ferguson – in the past five years. A new pilot program announced weeks after the Ferguson shooting will study racial bias in American cities and recommend ways to reduce the problem.

He has spoken about race in sometimes personal terms, recalling after the Ferguson shooting instances in which as a younger man he was stopped or confronted by police without cause. He has also said he understands mistrust of law enforcement in minority communities.