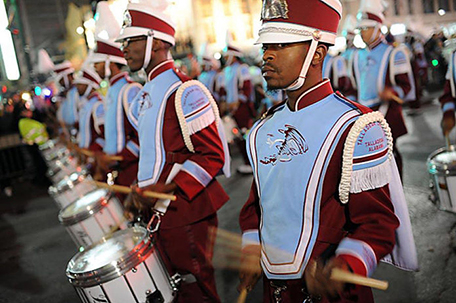 The Talladega College Marching Tornadoes Band will perform at President-elect Donald Trump’s inauguration in the nation’s capital on January 20, reports The Associated Press.

The Great Tornado is the only HBCU band that agreed to march in the inaugural parade.

“Congratulations to Talladega College Marching Tornadoes for [being] selected to march in the 2017 Presidential Inauguration Parade!” according to Grumptown magazine‘s Facebook page. “Represent for the State of Alabama! Marching Tornado Media.”

The Associated Press confirmed on Monday that the Marching Tornadoes will, in fact, perform at the inaugural parade.

The news that an HBCU band will perform at Trump’s inaugural parade almost immediately ignited controversy and backlash against the Black college from the Talladega community.

“We were a bit horrified to hear of the invitation,” said Shirley Ferrill of Fairfield, Alabama, a member of Talladega’s Class of 1974.

“I don’t want my alma mater to give the appearance of supporting him,” Ferrill said of Trump on Monday. “Ignore, decline or whatever, but please don’t send our band out in our name to do that.”

The Marching Tornadoes were established in 2012.

Beyoncé accused of lip-synching ‘The Star-Spangled Banner’ at inauguration