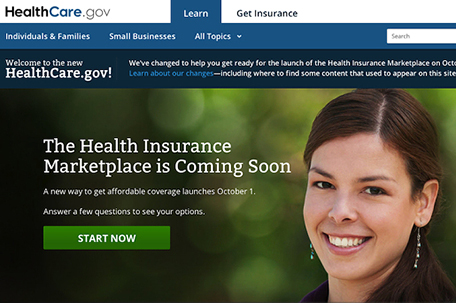 WASHINGTON– With a bright look to its rebuilt website, version 2.0 of President Barack Obama’s health insurance overhaul represents another chance to win over a skeptical public.

The risks include an unproven system for those renewing coverage and a tax hit that could sting millions of people. Those tax issues are the result of complications between the health care law and income taxes, and they will emerge during next year’s filing season.

“Things will not be perfect,” said Health and Human Services Secretary Sylvia M. Burwell, trying to set expectations. “We are aiming for a strong consumer experience, and it will be better.”

The Obama administration cannot afford to repeat last year’s online meltdown. Congress will be entirely in Republican hands in 2015, and GOP lawmakers will be itching to build the case for repeal. The Supreme Court’s decision Friday to hear another challenge to the law is also casting a shadow.

The health insurance exchanges offer taxpayer-subsidized private coverage to people who do not have access on the job. HealthCare.gov will serve 37 states, while the rest run their own markets.

This new sign-up period will be the first time that renewal has been tried for current customers, and also overlaps with the first tax-filing season that the law’s requirements are in effect.

On the plus side, premium increases are expected to be modest in many, though not all, states. New insurers have come into the market, promoting competition, and regulators now take a close look at anything above a 10 percent increase.

The online application for most new customers is down to 16 screens from 76. Website security is better, thanks to aggressive monitoring. The government and insurers have added call center staff.

The administration had said last week that consumers would be able to get an early peek at 2015 plans and premiums this weekend. It looked like that early goal was slipping. Officials said Sunday that window shopping would be available overnight, without giving a specific time.

This year, the bar will be higher.

The Congressional Budget Office has projected that 13 million people will be covered through federal and state insurance markets in 2015. That means retaining most of the 7 million people now covered and adding 6 million more. Many are skeptics who sat out last year’s campaign.

One potential motivator: The law’s tax penalty for remaining uninsured is rising, to a minimum of $325 for 2015.

“We have some momentum built up,” said Rachel Klein, enrollment strategist for Families USA, an advocacy group supporting the law. “We can build on that, but it is a somewhat higher bar to find all the people we need to help, because by definition, they are harder to reach.”

An Associated Press-GfK poll found that 31 percent of those questioned expect the health insurance exchanges to work better, while 49 percent think they will work about the same. Also, 18 percent expect version 2.0 to be worse.

Some of the potential enrollment pitfalls:

—For those already signed up, coverage will renew automatically if you do nothing. Sounds good, but maybe not. You could miss out on lower premium options and get stuck with an outdated and possibly incorrect subsidy. Shop around, but don’t dally. You have until Dec. 15 to update your income information or change plans if you want to have everything in place by Jan. 1.

—New customers, be advised: The Nov. 15-Feb. 15 open enrollment is half as long as last time, and it overlaps with the holidays. Try to get familiar with some of the basic health insurance trade-offs. A low-premium silver or bronze plan may not make sense if you’ll wind up with high out-of-pocket costs for the deductible and copayments. In that case, you might be better off going for the gold.

Some of the tax complications lurking:

—Most current customers are getting a tax credit to help with premiums. Those subsidies are tied to income, so you’ll have to file new forms with your 2014 taxes to prove you got the right amount. Too much subsidy and your tax refund will get dinged. Too little, and the government owes you. It’s bound to cause anxiety because many people depend on their tax refunds to pay bills.

—If you remained uninsured in 2014, you risk a penalty that will be deducted from your tax refund. It starts at $95 for those uninsured all year. Millions of people may qualify for penalty waivers, but getting exemptions could be an ordeal. Some appear simple, but for others you’ll have to mail in an application and supporting documents.

Melissa Dresler of Lexington, Kentucky, said she’s lucky that she got covered, but she also learned some lessons that should make her a better shopper this year. The climate change researcher unexpectedly found herself in need of a delicate operation. She woke up one day and something was wrong with her right eye. It turned out to be a detached retina.

Her surgery cost well into five figures, and she paid about $1,000. The problem came when she had to go out-of-network because of a complication. To keep premiums in check, many plans restrict a patient’s choice. The follow-up corrective surgery cost her about $6,000.

“I may gripe once in a while, but I am so happy with Obamacare,” said Dresler. “I feel so lucky I was covered.”

She adds: “If I had known that I was going to have a major emergency then I would have certainly invested more in a better plan.”