The High Price of Imprisonment 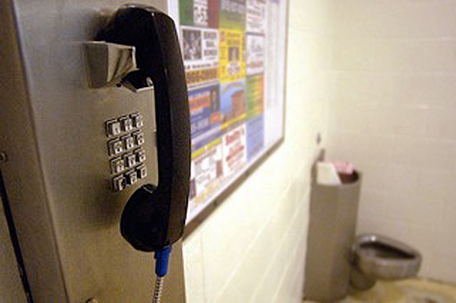 As incarceration rates continue to grow around the United States, the enormous costs of some prison services are increasingly being paid by those who can least afford it –- the families of inmates.

In 2001, when the DC Department of Corrections closed its notorious prison facility in Lorton, Virginia in 2001, Ulandis Forte, in prison for murder, was relocated to facilities far away from home, and family. His grandmother, Martha Wright, nearly blind and unable to travel, made frequent calls to prisons out of state –-in New Mexico, followed by Arizona, Kentucky — only to find herself deeply in hardship and debt due to exorbitant fees charged by the private companies contracted to provide prison phone services.

Forte and Wright are only the most well known among thousands of families struggling to stay in contact with incarcerated relatives. Their fight lies at the heart of more than a decade of work by lawyers and activists -–in courts and before the Federal Communication Commission (FCC) – to find relief.

Yet fifteen years later, with only some successes to claim, the fight continues, stalled repeatedly by bureaucracy and the power of corporate lobbyists.

But even as that phone battle looks for resolution, the companies providing those phones are finding new and creative ways to make an array of new services “essential” to prison management. And nearly all come at a cost to inmates and their families.

The evidence is clear — inmates who stay in regular contact with families and friends fare much better in prison, adjust to life better upon release and have a dramatically better chance of staying out of prison. Phone calls are intended to solve a critical problem when visitation becomes both a financial and logistical burden.

According to the Ella Baker Center for Human Rights, the families of inmates are among America’s poorest, with nearly two-thirds falling under or near the poverty line and unable to meet basic food and housing needs. More than 53 percent of American inmates are housed from 100-500 miles from where their families resides with over 16,000 inmates, about 2 percent, as far away as 1000 miles (source: Prison Policy Initiative).

Steven Matthews, the former chief information officer for the Illinois Department of Corrections explained the dilemma, “In Illinois, you have most prisoners being held downstate. For a family from Chicago, a visit in –person can mean the cost of a rental car, gas, food, maybe loss of work. Then when you get there, a lockdown or any number of things can happen. So add to that the cost of lodging, food and another day lost. By the end of that, it can be upwards of $600 or more for a visit. And that’s in the same state. Compared to that, a phone call is sometimes the only option.”

Yet, that “cheaper” alternative has become its own costly barrier. For some families, they can mean hundreds, or thousands of dollars in fees in addition to more than $13,000 on average in already existing debt from court costs and other expenses related to incarceration.

The phone services are not provided by traditional telecom companies such AT&T, Sprint or other providers. At the center of the issue are handful of private contractors, led by industry leaders Securus and Global TelLink (GTL), who provide both equipment and calls centers through which the calls are routed and monitored for security reasons.  In court cases, representatives of the industry say those security challenges are among the reasons calls come at such a high cost.

After many long years of effort, in 2015, part of the battle against high rates appeared to be won, when the FCC announced new rate caps that lowered rates to a range of $0.12 to $0.31 per minute, a sliding scale based on the size of a facility.  Prior to that ruling, a family could be charged an average $1.21 per minute in some facilities, and as high as $40 per minute in some extreme cases. Inmates themselves make on average, $4.73 per day. At the rate before the proposed caps, a full day’s wages was equivalent to about 3-4 minutes of a phone call.

But any sense of long term relief was short-lived. Attorneys representing the major providers of phone services, went on the attack, arguing in courts that the FCC lacked jurisdiction over calls made intra-state. The argument was sufficient enough for a federal judge to stay the action and effectively put most new reforms on hold. While a new ruling is pending, some fees have been held to an “interim cap”, which may or may not remain.

Still, prices can vary wildly depending on where an inmate is housed, from as low as $0.45 for a 15-minute call in West Virginia to $5.65 for the same call just one state over the border in Maryland.

What was an obvious victory for the private phone companies was also cheered by an unexpected ally of the high price phone call game –- the prisons themselves.

Through a complicated system of “commissions”, a practice the Campaign for Prison Phone Justice openly describes as  “kickbacks”, Securus, GTL and their smaller competitors win contracts, in part, based on the level of commissions they pay to prison administrations and  sheriff’s offices on a per call basis.

Lee Petro, the Washington DC attorney who represented Martha Wright and other inmate families pro bono ahs has been working on the issue for more than 12 years, cites a North Dakota proposal as a prime example. “Securus, in response to an RFP, proposed charging as little as $0.04 per minute without a commission, so they could presumable make a profit at that low a rate. But the rate they proposed, after commissions, was more than three times that rate at $0.13 a minute.”

For their part, prisons claim the commissions are deposited in “inmate services” funds that, in turn are used to fund such programs as distance learning and rehabilitation programs.  But according to Aleks Kajstura, legal director of the Prison Policy Initiative, which studied FOIA requests of expenditures, found that “… the great bulk of money raised by phone commissions have gone to salaries and administration, not to inmate programming.”

“The prison industry also claims that their bottom lines would be hurt irreparably at greatly reduced rates. Yet in states such as New York, where lower mandatory caps have been implemented, all evidence shows that lowering rates results in a higher volume of calls, and higher revenue that before the rate cuts. Basically, the lower the cost, the more people make phone calls,” said Kajstura.

Meanwhile, the families and inmates at the heart of the issue, wait in limbo as the FCC and advocates figure out their next best move against a powerful foe. Yet, one day after the election of Donald J. Trump, prison industry stocks went up significantly in the speculation that the new Administration would wipe away important gains made on the issue by the FCC.

According to Petro, “What’s most alarming about all these costs is not just that they are high, but they represent what is essentially a growing transfer of the cost of prisons from the government to the families of inmates. People need to know this.”