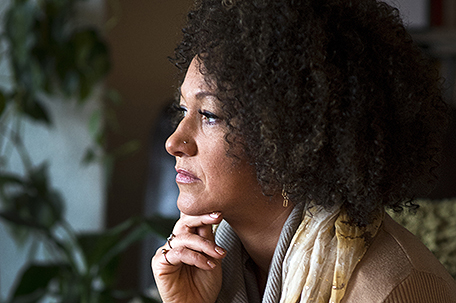 ABOVE PHOTO:  Rachel Dolezal, president of the Spokane chapter of the NAACP, poses for a photo in her Spokane, Wash. home. Dolezal is facing questions about whether she lied about her racial identity, with her family saying she is white but has portrayed herself as black, Friday, June 12, 2015.  (Colin Mulvany/The Spokesman-Review via AP, File)

SPOKANE, Wash. — The president of the NAACP’s Spokane, Washington, chapter resigned as furor mounted over her racial identity that emerged after her parents said she falsely portrayed herself as black for years even though she is actually white.

The announcement that Rachel Dolezal was stepping down was posted Monday on the civil rights group’s Facebook page. The posting said the attention surrounding Dolezal has distracted from the group’s goals.

“The dialogue has unexpectedly shifted internationally to my personal identity in the context of defining race and ethnicity,” according to the statement, attributed to Dolezal. “I am consistently committed to empowering marginalized voices and believe that many individuals have been heard in the last hours and days that would not otherwise have had a platform to weigh in on this important discussion.”

Meanwhile, Spokane is investigating whether the longtime figure in the city’s human-rights community lied about her ethnicity when she applied to be on the police oversight board. She also teaches African studies to college students.

Police on Friday said they were suspending investigations into racial-harassment complaints filed by Dolezal, including one from earlier this year in which she said she received hate mail at her office.

Her mother, Ruthanne Dolezal, said the family’s ancestry is Czech, Swedish and German, with a trace of Native American heritage.

Kitara Johnson, an NAACP member in Spokane who has been calling for Dolezal to step down, welcomed the resignation, which came about six months after Dolezal was elected president.

“That’s the best thing that can happen right now,” Johnson told The Associated Press on Monday. “We are going to stand in unity and solidarity.”

Johnson said the most important thing is to focus on the work of the NAACP, but she hoped Dolezal would remain a member of the organization.

A rally scheduled for Monday night in Spokane went on as planned.

“I foresee us praying for Rachel and the NAACP and the community and moving us forward,” Johnson said.