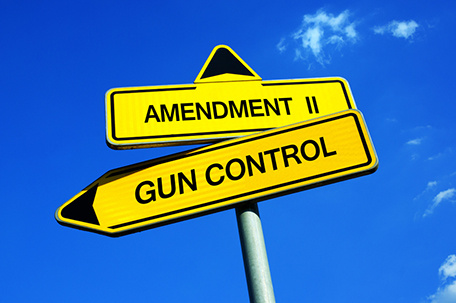 The latest school shooting in Parkland, Florida has left 17 people dead. It is the 30th mass shooting in the first 45 days of 2018.*

The fatal shooting in October 2017 at a Las Vegas music festival, which killed 58 concertgoers and injured hundreds more, is the deadliest mass shooting in U.S. history.

Only 16 months earlier, a gunman armed with a handgun and a semi-automatic rifle murdered 49 people and injured 58 at an Orlando nightclub in what was then the country’s worst mass shooting.

The horrific attack came less than six months after a man and a woman opened fire at a San Bernardino, California, social services center, killing 14 and injuring 22.

And with each mass shooting — from Columbine to Sandy Hook; Fort Hood to Virginia Tech — the national debate over gun ownership renews.

Despite the outpouring of grief and sympathy that followed the San Bernardino incident on Dec. 2, 2015, the very next day the Senate rejected a bill to tighten background check requirements on would-be gun buyers — just as it did in 2013, shortly after a lone gunman killed six adults and 20 children at Sandy Hook Elementary School in Newtown, Connecticut.

Whether 2017 will be any different remains to be seen. In fact, the issue of how to strike a balance between gun rights and public safety has been a political hot potato for years, and one that Congress has dealt with gingerly — too gingerly, in the view of groups favoring tighter firearms regulations.

The political climate of 2017 would hardly seem auspicious for action on the issue. Republicans generally oppose any type of gun control legislation — only four of 54 Senate Republicans voted in favor of the 2015 background check bill — and the GOP controls Congress until at least 2019. President Donald Trump pledged to protect Second Amendment rights if elected in 2016.

In June 2016, Democrats mounted a successful filibuster that forced Senate Republicans to vote on four gun control proposals — none of which passed.

The last major piece of gun control legislation to make it into law was the assault weapons ban, which passed in 1994 as part of a larger crime-related bill approved by Congress and signed by then-President Bill Clinton. But the ban, which applied to the manufacture of 19 specific models of semi-automatic firearms and other guns with similar features, expired in 2004, and repeated attempts to renew it have failed.

Some Democrats thought their support for the assault weapons ban cost them control of Congress in the 1994 midterm elections. Whether or not that’s true, there’s little question that the politics of gun ownership have swung to the right. Republicans largely oppose gun control, and Democrats are split, with some lawmakers cautious about going against the views of more conservative constituencies, especially in rural districts.

That was true among the 2016 presidential candidates. Eventual Democratic nominee Hillary Clinton contrasted herself with Sen. Bernie Sanders of Vermont on the issue of gun control during their primary-season debates. And after nine people were killed in a shooting at Umpqua Community College in Roseburg, Oregon, Clinton promised she would take executive action as president to expand background checks. Sanders, though historically more sympathetic to the gun rights cause, reacted strongly the day after the San Bernardino shooting with a series of tweets calling for universal background checks, closing the “gun show loophole” and renewing the assault weapons ban, among other proposals.

An Emotional Obama Unveils His Plan To Cut Gun Violence