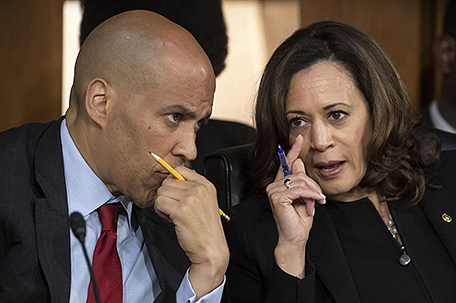 There’s quite a bit of conversation happening among the Black commentariat about the viability of the two current African-American presidential candidates currently running for the 2020 Democratic presidential nomination, Sen. Kamala Harris (D-Calif.) and Sen. Cory Booker (D-N.J.). That’s a natural conversation.

It’s essential the Black electorate — a sizable and very powerful voting bloc — assess the positions of candidates who have used their influence within the Black political space to drive their individual political careers.

However, the current and overall tone of that very public conversation — particularly on social media — appears so mean-spirited, vindictive and lacking in pure policy substance that it threatens to derail both candidates before they even reach the first set of Democratic Party primaries in 2020.

Much of this is self-inflicted or channeled from that demographic group, and there is already mounting evidence that bad actors (from Russian hackers to shadowy Republican operatives) are manipulating the debate.

First, let’s take a quick look at how those two candidates perform among the most visible (announced and unannounced) contenders. RealClearPolitics continues to aggregate and average various polls.

Harris still comes out on top when the straw poll explores “personal preferences”:

Booker still hasn’t gained any real traction, yet. Yet, according to the RCP average, he’s still very much solidly within the top six.

Being the “Black candidate”

Both Harris and Booker are already faced with a tough reality: being a “Black candidate” in a field that is dominated by White candidates and for a party that has a very long, complicated and tested relationship with Black voters who are historically loyal. Being the Black candidate already places an enormous amount of pressure on both, as they must compete against a unique set of expectations that are not applied to the other candidates on account of race. They also find themselves forced to discuss Black issues or to serve as “representatives” when no other candidate is expected to. And despite their name-brand, they will still face struggles and perceptions that White candidates won’t be forced to contend with. They’ll need to work twice as hard on fundraising, too. This will be particularly challenging for the Black woman candidate.

Additionally, there is the added pressure of navigating two visibly confrontational demographic groups. They will need to manage conversations and interface with White voters while managing the same with Black voters, while also attempting to tailor messaging for growing Latino, Asian and other diverse electorates and while undertaking the grueling task of segmenting those messages and platforms by gender, age, region, income and individual priorities. It is a major undertaking, to say the least.

Black presidential candidates as the norm

It is a tremendous accomplishment in an of itself that Black people have evolved and matured politically so fast since the Voting Rights Act of 1965. Never before have we seen a situation where it’s now considered normal to have not just one, but two credible and very strong Black candidates engaged in a major presidential primary. Historically, we typically look for one; in this round, there are options.

Even the broader American electorate, according to a recent YouGov poll, understands that diverse presidential candidates are the rule as opposed to being the exception to the rule …

The silly quest for the perfect Black candidate

Of course, Black voters aren’t “monolithic” and shouldn’t be expected to think alike politically. They should have the freedom and flexibility to pick whomever they want as an elected leader or who they feel best aligns with their demands and interests.

But Black voters shouldn’t expect perfect Black presidential candidates, either. Indeed, there is no such thing as a perfect candidate on any level; voters generally don’t expect that from White candidates. And, when candidates are running for elected office on any level, Black voters cannot expect fully “pro-Black” candidates. Voting decisions must be based, as much as possible, on an assessment of material conditions and informed public policy. In addition, the historical, political, social and economic stakes are way too high for Black voters to make these decisions based on personal tastes and preferences — decisions that are based less in an accurate examination of policy platforms and more in an irrelevant exploration into the personal lives of candidates

And so the Black electorate itself will need to make a number of choices and arrive at a basic collective understanding on expectations. There should be some clarification on whether the Black political community is participating in the American political process to simply make a point, or if it’s there to actually win races and use that win to affect real policy change. If it’s the latter, Black voters and noisy non-voting participants in Black political discourse must then understand that while the Black electorate is powerful, it only constitutes a 12 percent share of the larger national electorate. Ultimately, Black voters (as a collective) can’t act as if they’re 50 percent or more of the overall national voter share. That’s simply not the case, and it begs a reality check. It means, however, that Black voters will need to think and act strategically, even if that includes aligning themselves with other voting blocs.

So, it is reasonable to ask Black presidential candidates their perspectives on a “Black agenda” and how they’ll address those issues. It’s not an automatic disqualifier if they can’t say “Black agenda” or won’t mention unique Black challenges, but it should be viewed as a problem if Black presidential candidates are unable to have open conversations about issues such as race, racism and inequality in front of mainstream audiences. Those conversations are essential and are just as useful to the nation as a whole as they are to Black people specifically.

Still, candidates should address a “Black agenda” in such a way that does not compromise their standing as a viable or, potentially, winning candidate. Expecting otherwise is unrealistic and it effectively dilutes Black maneuverability in the larger political space. It’s also contradictory: the Black electorate, rightfully so, constantly demands its inclusion and influence in the broader political universe — yet, there are personalities within it who refuse to accept that entry into the broader political space, in a diverse society, requires smart and strategic navigation.

Additionally, the broader Black electorate must also find a way to ascertain, exactly, what is the “Black agenda.” There’s been no effort to determine that, nothing official or consolidated. It’s based merely on a collection of assumptions about what we should know is important to Black people or what we think is important. Demands to discuss these issues can’t be made on presidential candidates if they don’t know, specifically, what those demands are.

As a result, discussions and critiques surrounding Black presidential candidates can’t be mired in hostility to those candidates based on ill-informed analysis and gossip. Some of that critique, as some analysts are warning, smells of manipulation from those who seek to thoroughly damage the Democratic party and its candidates to a level that makes both completely ineffective in a general election effort to finally rid the country of President Trump. Harris strikes us as one glaring example where that’s happening. Questions ranging from her “mixed race” background to her White husband to her grasp of hip-hop music while smoking weed continue to hamper her campaign — yet, they are highly irrelevant and, in the context of real Black political issues and discourse, highly inappropriate and small-minded. Not only are they manifestations of internalized Black self-hate — since her Jamaican and, even, Indian heritage automatically includes her in the larger Black Diaspora — but they are also placing visibly sexist pressure on the Black female candidate that’s unseen for the candidates in the field.

In the end, Black political discourse on Black presidential candidates must be focused on substance versus style. Either we want to see ourselves dominant in these spaces or we are fine with acquiescing to our systematic absence from them.

Charles Ellison is a veteran political strategist, host/executive producer of “Reality Check” on WURD (Philadelphia) and principal of B|E Strategy. He is found on Twitter @ellisonreport.

Guest Editorial: The unfulfilled power of the Black vote