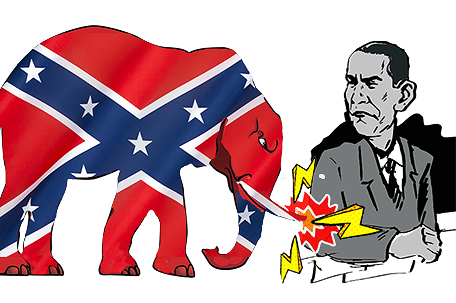 Editor’s Note:  A rare occurence appeared last weekend in one of mainstream media’s most hallowed newspapers, The New York Times… the acknowledgement of continued vicious right-wing attacks and disrespect of Barack Obama’s presidency.  It is for this reason, we shed a special light on the Times’ April 12, 2015 Sunday Editorial below including a response from the SUN.

It is a peculiar, but unmistakable, phenomenon: As Barack Obama’s presidency heads into its twilight, the rage of the Republican establishment toward him is growing louder, angrier and more destructive.

Republican lawmakers in Washington and around the country have been focused on blocking Mr. Obama’s agenda and denigrating him personally since the day he took office in 2009. But even against that backdrop, and even by the dismal standards of political discourse today, the tone of the current attacks is disturbing. So is their evident intent — to undermine not just Mr. Obama’s policies, but his very legitimacy as president.

It is a line of attack that echoes Republicans’ earlier questioning of Mr. Obama’s American citizenship. Those attacks were blatantly racist in their message — reminding people that Mr. Obama was black, suggesting he was African, and planting the equally false idea that he was secretly Muslim. The current offensive is slightly more subtle, but it is impossible to dismiss the notion that race plays a role in it.

Perhaps the most outrageous example of the attack on the president’s legitimacy was a letter signed by 47 Republican senators to the leadership of Iran saying Mr. Obama had no authority to conclude negotiations over Iran’s nuclear weapons program. Try to imagine the outrage from Republicans if a similar group of Democrats had written to the Kremlin in 1986 telling Mikhail Gorbachev that President Ronald Reagan did not have the authority to negotiate a nuclear arms deal at the Reykjavik summit meeting that winter.

There is no functional difference between that example and the Iran talks, except that the congressional Republican caucus does not like Mr. Obama and wants to deny him any policy victory.

On April 3, Colbert King, a Washington Post columnist summarized a series of actions by Republicans attacking the president’s authority in areas that most Americans thought had been settled by the Civil War. Arizona legislators, for example, have been working on a bill that “prohibits this state or any of its political subdivisions from using any personnel or financial resources to enforce, administer or cooperate with an executive order issued by the president of the United States that has not been affirmed by a vote of Congress and signed into law as prescribed by the United States Constitution.”

The bill sounds an awful lot like John C. Calhoun’s secessionist screed of 1828, the South Carolina Exposition and Protest. Laurie Roberts of The Arizona Republic wrote that it was just “one of a series of kooky measures aimed at declaring our independence from federal gun laws, from the Affordable Care Act, from the Environmental Protection Agency, from the Department of Justice, from Barack Obama.”

Republicans defend this sort of action by accusing Mr. Obama of acting like a king and citing executive actions he has taken — on immigration and pollution among other things. That’s nonsense. The same Republicans had no objection when President George W. Bush used his executive authority to authorize the torture of terrorism suspects and tap the phones of American citizens. It is not executive orders the Republicans object to; it is Mr. Obama’s policies, and Mr. Obama.

The Senate majority leader, Mitch McConnell, who declared war on the new president in 2009 as minority leader and used the filibuster to paralyze the Senate, essentially told foreign governments to ignore the carbon-emission goals Mr. Obama was trying to set by international agreement. Because climate-change deniers in Congress and in some states oppose the effort, setting those goals is pointless, Mr. McConnell pronounced last month.

If this insurrection is driven by something other than a blend of ideological extremism and personal animosity, it is not clear what that might be. But it is ugly, it deepens mistrust of government and it harms the office of the president, not just Mr. Obama.

More than just hitting it, we published it!

The “it” in this case is another newspaper’s editorial opinion. Moreover, this editorial is from the mainstream media’s flagship journal, The New York Times.

Traditionally, the history of the Black Press, dating back to the abolitionist warrior Frederick Douglass’ North Star in 1847 would not comfortably sanction such a re-publication. However, there are times in the struggle to engage a full civic discourse that traditions can be set aside. Last Sunday, the SUN became convinced this was one of those occasions.

America’s mainstream media for the past seven years has remained nearly mute on the theme that at the root of the Republican Party’s virulent and unrelenting attacks against the presidency of Barack Obama was nothing more than pure revulsion at his Black skin. Even the President, himself, has been loath to mention such aversions except in the most rare instance when gracious excuses and professional overlooks can’t cut it any longer. What other brother who has achieved for this country what he has would have gallantly brushed off that White congressman’s petulant scream, “Liar,” during the first State of the Union address?

Had an African American newspaper like the SUN published such an over-the-top denunciation of GOP tactics like that which appeared in the Times on April 12, 2015, it would have been dismissed by most White-owned media outlets as the rantings of Obama’s political base.

Now, however, the leaders of the Republican Senate and House of Representatives can no longer pretend they haven’t been called out by the well connected scribes whose approval they regularly seek and feel they are entitled to.

Will last week’s editorial make much of a difference in how the media covers the next series of political attacks or outrageous meanderings from the right? Probably not. But, at least the record of this history will forever be cognizant of just how base some White men will allow themselves to fall. So let it be written, so let it be done.