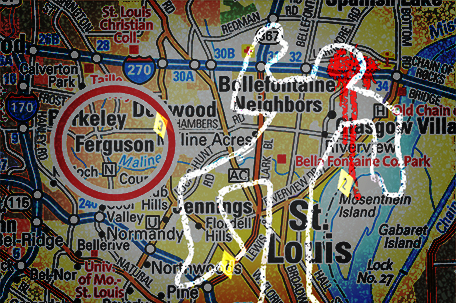 Eighteen year-old Mike Brown is the latest name to add to the again growing list of victims of brazen overuse of deadly force by cops. Brown was allegedly gunned down by a Ferguson, Missouri police officer with his hands raised after a stop. He fit the usual pattern of those killed. In almost all cases, the victims are unarmed, were not charged with having committed a crime, their killings occur in broad daylight, and there are witnesses. The other part of the deeply disturbing familiar pattern is that they are young African-Americans or Hispanics. The officers that commit these deadly acts are placed on paid administrative leave and police officials, when confronted with the pro forma outcry and demands from civil rights and community leaders for an investigation, make solemn promises to do that. They assure that their investigations will be thorough and impartial.

That’s the start of the problem. The police agencies that are on the hot seat for a dubious shooting or another act that results in the death of a civilian investigate themselves. There is almost never an independent, outside agency that will conduct a truly impartial investigation. The one agency that can do that is the Justice Department.

Despite this wave of highly questionable police shootings of mostly young blacks and Latinos the Justice Department has done almost nothing to nail shoot-first cops. Periodic reports on police misconduct by Human Rights Watch, an international public watchdog group, found that federal prosecutors bring excessive force charges against police officers in less than one percent of the cases investigated by the FBI involving allegations of police abuse. The group also found that there has been almost no increase in the skimpy number of police misconduct cases prosecuted by the Justice Department in the past decade.

Even in the rare cases where cops are hauled into a court docket for overuse of deadly force, it’s near impossible to convict. Their defense lawyers are top guns, with lots of experience defending police officers accused of misconduct. Police unions bankroll their defense and spare no expense. Cops rarely serve any pre-trial jail time, and are released on ridiculously low bail.

If the cops are tried by a jury, police defense attorneys seek to get as many middle class people, whites and even blacks and Latinos, on the jury as possible. The presumption is that they are much more likely to believe the testimony of police and prosecution witnesses than black witnesses, defendants, or even the victims.

It’s an uphill battle for prosecutors to overcome both pro-police attitudes and negative racial stereotypes. Stanford University researchers recently found that even when many whites are presented with evidence that the criminal justice system is loaded with racial bias toward blacks they are more likely to support tough, draconian laws such as three strikes, tough sentencing and increased incarceration. The galling conclusion of the researchers was that informing many whites that African-Americans are significantly over-represented in the prison population “may actually bolster support for the very policies that perpetuate the inequality.”

The negative perceptions of blacks, especially black males, by much of the public are not the only problem in effecting effective legal measures against police violence. There is no ironclad standard of what is or isn’t an acceptable use of force in police misconduct cases. It often comes down to a judgment call by the officer. In the Rodney King beating case in 1992 in which four LAPD officers stood trial, defense attorneys painted King as the aggressor and claimed that the level of force used against him was justified. This pattern has been evident in a number of celebrated cases since then. Police claim that they feared for their lives in confronting civilians and they use deadly force solely in self-defense. If brought to trial judges and juries routinely buy this line and acquit.

The code of silence is another powerful obstacle to convicting bad cops. Officers hide behind it and refuse to testify against other officers, or tailor their testimony to put the officer’s action in the best possible light.

Prosecutors often are barred from using statements made during internal investigations of officer misconduct in court proceedings on grounds of self-incrimination. This knocks out another potentially crucial prosecution weapon. Federal prosecutors who re-tried the officers that beat King learned a vital lesson from the abysmal failure of local prosecutors to convict them. They did not rely exclusively on the videotape evidence but on expert testimony on the use of force. That proved that the officers went way over the top against King. Despite the massive time, resources, and care devoted to that case, two of the four officers were still acquitted.

If past history is any guide, the investigations into the killing of Brown and Eric Garner by chokehold by a New York City police officer after months of time passing will go down in the books as justified or within police policy. This again will prove the point that when it comes to nailing cops for deadly force it’s nearly impossible.

Jury way out on a federal prosecution of Darren Wilson