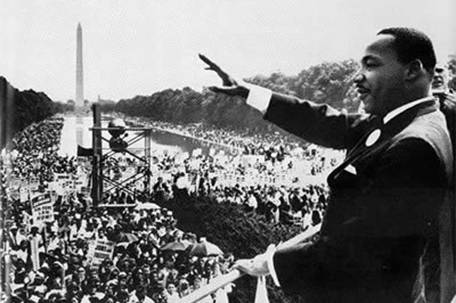 ABOVE PHOTO:  Dr. Martin Luther King Jr. during his speech at the March on Washington. 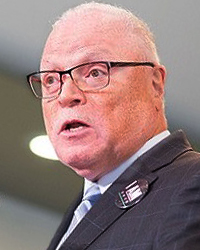 Fifty-five years ago this week, Dr. Martin Luther King stepped to the podium at the Lincoln Memorial and delivered one of the most famous speeches in American history: “I Have A Dream.”

The March on Washington was about more than desegregation, voting rights and equal access to public accommodations. It was also a demonstration specifically for economic empowerment and opportunity. Organized by two labor leaders, Bayard Rustin and A. Philip Randolph, its full name was the “March on Washington for Jobs and Freedom.” And Dr. King’s dream, in addition that we be judged by the content of our character, was that African-Americans would no longer live “on a lonely island of poverty in the midst of a vast ocean of material prosperity” (one of the speech’s first lines).

Throughout his life, Dr. King made the connection between economic justice and racial justice a centerpiece of his doctrine, especially toward the end of his life when he began to organize the Poor People’s Campaign. He was also a strong ally of the union movement, which is what brought him to Memphis, Tennessee in 1968.

Thirteen hundred sanitation workers – members of my union: the American Federation of State, County and Municipal Employees (AFSCME) – had gone on strike to protest plantation-like working conditions. For African-American workers up against a pro-segregation mayor, walking off the job was an unimaginably courageous statement of collective action. But that’s exactly what they did, after the gruesome death of two men in an accident caused by a malfunctioning, rundown truck. They marched under a proud and defiant slogan, a simple but powerful declaration of their humanity in just four words: I AM A MAN.

Dr. King came to Memphis to lend his support. Despite crippling fatigue and overwhelming demands on his time, he came to Memphis because he saw in the sanitation workers’ struggle everything that the next phase of the civil rights movement had to be about – fighting poverty and asserting the dignity of working people.

Memphis, tragically, would be Dr. King’s last campaign. He was gunned down by an assassin at the Lorraine Motel on the evening of April 4. A few weeks later, the strike was settled, with the city acceding to most of the sanitation workers’ demands.

To mark the 50th anniversary of these events, AFSCME launched an initiative called I AM 2018, which brought thousands to Memphis this past April to march and demonstrate, to honor the sacrifice of Dr. King and the sanitation strikers.

But I AM 2018 isn’t just a history lesson. It is about both reflection and renewal. It is more than a commemoration; it’s a call to action. Because, while there has been substantial progress since 1968, America is still plagued by racial discrimination, vast income inequality and a rigged economy that stifles the freedom of all working people. The goal is to draw courage and inspiration from the Memphis heroes, so we can continue the fight for civil rights, workers’ rights and human rights.

So, I AM 2018 didn’t begin and end with a few events in Memphis this spring. This is a sustained campaign involving the training and mobilizing of thousands of activists to make change in their communities. I AM 2018 is about political engagement. Over the next several weeks we will connect the Memphis story to today’s challenges, asking people to answer the call to action: by organizing not just in the streets but also online, by voting in the upcoming elections, and by holding elected officials accountable after that.

Through I AM 2018, we must put Dr. King’s dream on the ballot in November and on the nation’s agenda in the months and years to follow.

Lee Saunders is the national President of the American Federation of State, County and Municipal Employees (AFSCME). You can follow the I AM 2018 campaign on Instagram (@IAM2018).