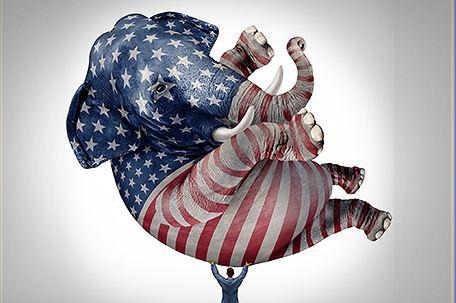 GOP pundits and some in the media gleefully noted that a few African-American listeners purportedly walked out on President Barack Obama during a campaign speech he made at a Maryland high school on October 19 to boost the candidacy of Maryland gubernatorial Democrat candidate Lt. Governor Anthony Brown. Brown is in a bid to become the nation’s second African-American governor. This was more than merely an excuse to poke fun at Obama. The point is that supposedly many African Americans are so turned off by Obama that they will stay home in droves on November 4. And since black and Hispanic voters typically have a lower turnout during off year national elections than older whites, this supposedly will further shatter the Democrat’s chances of staving off the much predicted Republican “wave” of mid-term election victories. The standard prediction is that the GOP is likely to seize control of the Senate, tighten its grip on the House, and ramp up its control of even more state legislatures and possibly governorships.

The GOP has made no secret of what that will mean. It will hammer even harder the Affordable Care Act, permanently shelve any effort at a minimum wage hike, kill any effort to strengthen voting rights protections, further stymie efforts to expand Medicaid, and harden its line against any of Obama’s judicial and administration appointee that it deems to liberal or moderate. It will effectively dismantle the firewall that Senate Democrats have erected to keep many of the nutty, retrograde initiatives and bills shoved up by the tea party influence GOP controlled House from getting to the Senate floor.

This would force Obama to do two things to counter the GOP dominance. One is to veto any of the GOP passed bills that gut or peck away at education, health care, and job creation spending and initiatives. The other is to force him to continue to pen more executive orders to get any effective action on vital initiatives. In both cases, the GOP will stand this on its head and scream even louder that Obama is a tyrant, and attempting to usurp congressional authority. There almost certainly will be more dark hints again of impeachment. The aim is to emasculate his presidency.

Senate Minority Leader Mitch McConnell crowed the day after Obama won election in 2008 that the GOP would do everything humanly possible to make Obama either a one term president or failing that a failed presidency. That boast wasn’t just about stonewalling Obama. It was a continuation of the GOP’s high intensity war waged by successive GOP presidents Ronald Reagan, George Bush Sr. and George W. Bush against the moderate reform agenda of Democrats. What’s euphemistically called the liberal, big government, entitlement agenda. That means dismantling or gutting the entire range of health, education, and economic support programs for the poor, working class and minorities.

For the six years of Obama’s White House tenure, the GOP controlled House, most GOP senators, and GOP controlled state Legislatures and state houses across the country, have dithered, hectored, obstructed, and torpedoed the range of initiatives from voting rights protections, Medicaid expansion, greater public school funding, job creation programs, criminal justice and immigration reform, blocked the appointment of moderate judicial nominees, and intensified the assault on labor unions and the Affordable Care Act. A GOP compliant Supreme Court has done everything possible to demolish the campaign funding playing field to allow big corporations and Wall Street to bankroll with impunity rock solid corporate and financial industry friendly Republicans and some Democrats.

The GOP’s end game is not just its long dreamed of completion of the conservative counter revolution, but to establish a winning game plan for the 2016 presidential election. It’s a simple one, pass more vote restrictive laws to drive as many blacks and Latinos from the polls as possible. Then pour tens of millions into an unprecedented campaign of lies, distortions, and all out character assaults on Hillary Clinton in an effort to knock her out the box as the Democrat’s best hope to keep the White House. The GOP has even put up a handful of black Republicans to bolster its sham that it’s serious about making the GOP more diverse and welcomes black voters with open arms. To further that sham and reinforce its message of Democratic abandonment of blacks, it has churned out position papers that purportedly show that blacks have fared worse under Obama and the Democrats than in years past.

The brutal reality is that a GOP controlled Congress, a GOP White House, a lock down Supreme Court and a majority of GOP controlled state legislatures and governorships would pose something that America hasn’t seen in decades, and that’s a GOP dominated America. This is a scary prospect and one that will further sink black America. This election is the time to stave off that prospect.

Earl Ofari Hutchinson is an author and political analyst.  He is a frequent MSNBC contributor. He is an associate editor of New America Media. He is a weekly co-host of the Al Sharpton Show on American Urban Radio Network. He is the host of the weekly Hutchinson Report on KTYM 1460 AM Radio Los Angeles and KPFK-Radio and the Pacifica Network.