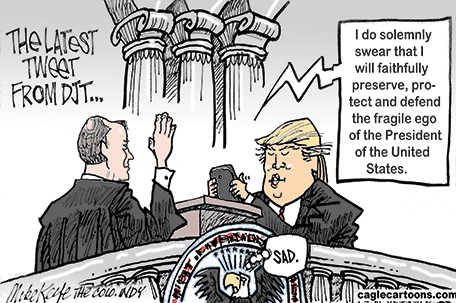 A day after being sworn-in as America’s 45th President, Donald Trump found out in a fairly graphic way what it looks like when 51 percent of the population has had enough of you.

Over the course of the 2016 Presidential Election, America learned that Republican Presidential nominee Donald Trump really liked being the center of attention.

At his swearing-in as our nation’s 45th President on Friday, Trump got the attention he craved from both supporters and opponents alike. And in the end, he wasn’t really happy with all of it.

That’s because protesters– most of them women– took to the streets around the world to let the new President know that while he may have won this round, the war wasn’t over and they were ready to mix it up. About 500,000 women from around the country took to the streets of Washington, D.C. in a Women’s March so large that it had to be diverted from its original path past the White House.

Trump’s supporters on the National Mall were armed with their wish lists for the first 100 days of his term. For Frances Taylor of Huntsville, Alabama, her wish was for the new president to make good on his promise to secure the nation’s borders.

“I think he understands how important to stop the importing of drugs over our border,” she said. “I also hope he’ll loosen some of the regulations on businesses.”

For Adrian Wright of Chicago, helping her city become a safer place through job creation and better schools was on her list.

“We need change,” she said. “Locally, a lot of schools have closed and crime has gone up. I’m hoping that he’ll stimulate the economy because Chicago has had a lot of manufacturing jobs leave the city. We used to have places where steelworkers and people who didn’t go to college would be able to earn a living. All of the industry has left.”

For Hannie Santana of Upstate New York, who brought her daughter the repeal and replacement of Affordable Care Act– or what most of the folks in the audience referred to as Obamacare– was on her wish list.

“It’s hurting people,” she said. “The co-pays are too high. I had a plan for my company, but we had to drop it because the deductibles were too high. I want my plan back.”

But for Terry Gray of Glen Mills and her husband Jim, the first thing they wanted to see President Trump tackle in his first 100 days was unifying a country that had been ripped to shreds by a bruising campaign.

“I don’t want him to be like the person we saw during election season,” Terry Gray said. 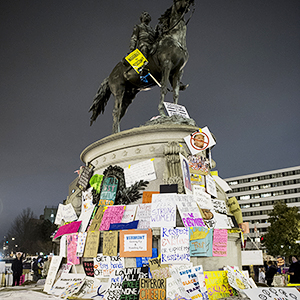 Protesters leave their signs and banners in Thomas Circle following the Women’s March on Washington on Saturday, Jan. 21, 2017, the day after the Inauguration of Donald Trump as the 45th President of the United States.
(Photo By Bill Clark/CQ Roll Call) (CQ Roll Call via AP Images)

Jim Gray had a suggestion on how he could start the healing.

“It’s an attitude,” he said. “It’s the words he chooses to use. It’s going to take a while. If he can turn around the economy and people are feeling good about themselves that will be good. There’s a lot of misery and I think that’s a shame.”

Misery was a big focus of Trump’s inauguration speech.

Declaring that this transition was a transfer of power from Washington’s elites to the people and promising an America First focus, he hit on many of the themes that had propelled him to victory during his campaign.

“At the center of this movement is a crucial conviction — that a nation exists to serve its citizens,” Trump said. “Americans want great schools for their children, safe neighborhoods for their families and good jobs for themselves. These are just and reasonable demands of righteous people and a righteous public.”

“But for too many of our citizens, a different reality exists,” Trump continued. “Mothers and children trapped in poverty in our inner cities, rusted out factories scattered like tombstones across the landscape of our nation, an education system flush with cash but which leaves our young and beautiful students deprived of all knowledge. And the crime, and the gangs, and the drugs that have stolen too many lives and robbed our country of so much unrealized potential. This American carnage stops right here and stops right now.’

Whether or not that was the truth depended on whom you talked to. For the people participating in the Women’s March on Saturday, the American Carnage began when Trump took the oath of office.

Carrying signs saying, “Orange Is The New Problem”, “If Mama Ain’t Happy, Nobody’s Happy” and “I Could Be Sleeping Right Now, But You’ve Forced Me To Protest”, people began gathering at the Capital early Saturday morning under the same charcoal gray skies that greeted the new President to hear from a star-studded roster of speakers including singers Alicia Keys and Madonna, who made headlines for expressing a desire to blow up the White House, singer/actress Janelle Monae, actress Ashley Judd, and the Mothers of The Movement.

For Pamela Pinnock of Arlington, Virginia, the march was an opportunity to let the powers that be in her city know that she won’t take anything the Trump Administration does lying down.

“I wanted to lend my voice and my body to the resistance,” she said. “So many of the rights that I fought for my whole life this administration is trying to take away. We have moved forward and this administration wants to take us back. Annoyed doesn’t come close to summing up how I feel. I’m angry.” she said.

Joanne Porter and her 14-year-old daughter Kasey Gleason attended the Washington March. For Kasey, whose presidential frame of reference begins and ends with former President Barack Obama, the march was a way to express her concern for the future.

For her mother, the concern was making sure that her daughter has the same opportunities she did, something that the Trump Administration might imperil.

“I’m disappointed because this is making me feel like we’re going backward,” Porter said. “I’m afraid that [Kasey] won’t have the same opportunities that I had. There won’t be as much access to college with his policies.”

Women from around the country, including Philadelphia, held sister marches in protest of the new president, the policies he espouses, and the sexist overtones of his campaign. Worldwide protests in Canada and London also greeted him.

The Philadelphia Sunday Sun’s coverage of the 2017 Inauguration is sponsored by the following: Prof. Kim Pearson, Colety Bain, Sheila Green Hoffler, The Phelan E. Smith Foundation and readers like you.