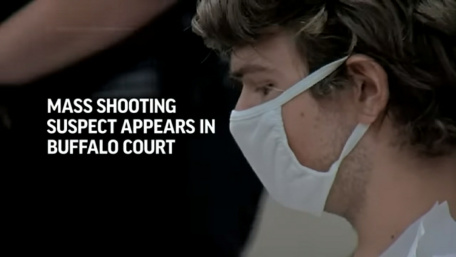 AP–Gunman Payton Gendron, 18, appeared briefly in court to hear that he was indicted on first degree murder in the killings of 10 people at the Tops Supermarket in Buffalo, New York. Most of the victims the killer targeted were African Americans.

“Payton, you’re a coward!” someone shouted the courtroom gallery as he was led away.

Gendron, whose lawyer entered a not guilty plea for him at an earlier court appearance, didn’t speak. His attorneys later declined to comment. He is being held without bail and is due back in court June 9.

Authorities are investigating the possibility of hate crime and terrorism charges against Gendron, who apparently detailed his plans for the assault and his racist motivation in hundreds of pages of writings he posted online shortly before the shooting. It was livestreamed from a helmet-mounted camera.

“We need to hold all that have aided and abetted the hate in this country accountable,” Sharpton said at the news conference outside Buffalo’s Antioch Baptist Church. The civil rights activist’s group, the National Action Network, plans to cover funeral expenses for those killed.