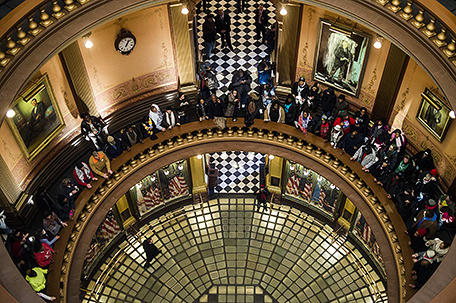 ABOVE PHOTO:  More than 150 protestors from Flint and Detroit chant in solidarity in the main lobby, asking for the resignation of Gov. Rick Snyder in relation to Flint’s water crisis on Thursday, Jan. 14, 2016 at the Capitol in Lansing, Mich.  (Jake May/The Flint Journal-MLive.com via AP)

Then-chief of staff Dennis Muchmore later told the governor that residents were “caught in a swirl of misinformation” about lead contamination and that it was up to city and county leaders to confront the issue, according to the emails, which were released Wednesday.

“Of course, some of the Flint people respond by looking for someone to blame instead of working to reduce anxiety,” Muchmore wrote. “We can’t tolerate increased lead levels in any event, but it’s really the city’s water system that needs to deal with it.”

In a Sept. 25 email, Muchmore said he could not “figure out why the state is responsible” before noting that former state Treasurer Andy Dillon had signed off on the city’s plans to build a water pipeline from Lake Huron, which required a temporary switch to the Flint River during construction.

So, he explained, “we’re not able to avoid the subject.”

Muchmore also said two state agencies and the U.S. Environmental Protection Agency could not “find evidence of a major change” in lead levels.

By early October, the Snyder administration was forced to acknowledge the validity of the lead concerns and help Flint return to the Detroit water system.

The two-term Republican released more than 270 pages of emails a day after his annual State of the State speech in which he apologized again for the emergency and pledged to act. He called the release of the messages – which are exempt from Michigan’s public-records law – “unprecedented” but necessary so people “know the truth.”

He did not release the emails of his staff, drawing criticism from Democrats and open-government advocates. The rest of the administration is subject to the Freedom of Information Act.

According to Muchmore’s emails to Snyder, officials at the Department of Environmental Quality and the Department of Health and Human Services felt some people in Flint were trying to turn the lead issue into “a political football,” claiming the agencies were underestimating the danger and trying to shift responsibility to the state.

Flint’s water became contaminated with lead when the city began drawing from the river in 2014 as a cost-cutting measure while under state financial management. The water was not properly treated to keep lead from pipes from leaching into the supply.

Snyder has said he was first briefed on the “potential scope and magnitude” of the crisis on Sept. 28. State epidemiologists validated local physicians’ findings on Oct. 1, and the governor said he immediately ordered the distribution of filters along with water and blood testing.

In December, Snyder learned that the task force he appointed to investigate the crisis had concluded that the Department of Environmental Quality was primarily to blame.

The task force chairman, Ken Sikkema, said in a separate message that the finding was “critical and urgent” and could not be delayed until the group completed its report.

Snyder aide Jarrod Agen told the governor on Dec. 28 that the task force’s “harsh” verdict suggested that personnel changes at the environmental department scheduled for after the holidays should not wait. Agency Director Dan Wyant’s resignation – and the firing of three other staffers – should take effect the next day.

Also Wednesday, Snyder asked President Barack Obama to reconsider the denial of a federal disaster declaration to address the crisis, saying it poses an “imminent and long-term threat” to residents.

Obama declared an emergency – qualifying the city for $5 million – but concluded that the high lead levels are not a disaster based on the legal requirement that disaster money is intended for natural events such as fires or floods. Snyder had estimated a need for up to $95 million over a year.

In his appeal letter, Snyder called the decision a “narrow reading” and likened the crisis to a flood, “given that qualities within the water, over a long term, damaged the city’s infrastructure in ways that were not immediately or easily detectable.”

The community about 75 miles north of Detroit, has about 100,000 residents, with about 40 percent of them living below the poverty line. The population is nearly 60 percent black.

The lead- which can lead to behavior problems and learning disabilities in children and kidney ailments in adults – has left Flint residents unable to drink unfiltered tap water.

Flint Mayor Karen Weaver refused to call for Snyder’s resignation while at the U.S. Conference of Mayors meeting in Washington, D.C., saying investigations should go forward.

“I’m staying focused on what I need to get from him right now,” Weaver said Wednesday.

The Michigan House on Wednesday approved Snyder’s request for $28 million more in the short term to pay for more filters, bottled water, school nurses and testing and monitoring – on top of $10.6 million allocated in the fall. The money would also replace plumbing fixtures in schools with lead problems and help Flint with unpaid water bills. The measure moves to the Senate for expected action next week.

Snyder plans to make a bigger request in his February budget proposal. He also announced the deployment of roughly 130 more National Guard members to the city.