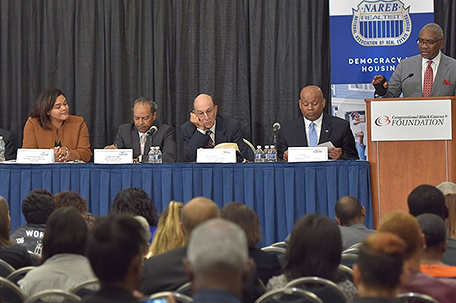 Despite the fact that the Fair Housing Act was passed by Congress more than 50 years ago, evidence reveals that government-supported racial discrimination in home buying remains rampant across the U.S. with little legislative remedy or recourse.

This is the reason that members of the National Association of Real Estate Brokers (NAREB), a 71-year-old organization of Black real estate professionals, is pushing Congress to take action after a NAREB-issued report and a string of independent housing experts confirmed pervasive discrimination in homeownership.

“Trends leave us today with a Black homeownership rate of 41.6 percent – merely the same as it was just two years after the signing of the Fair Housing Act of 1968. Yes, there are reasons,” said NAREB president Jeffrey Hicks. “There has been decades of federal, state and local government supported discriminatory housing and housing finance policies, disparate lending patterns, redlining, and exploitation, resulting in unimaginable losses of wealth.”

Hicks gave the opening remarks to an audience of hundreds of people assembled at a two-hour NAREB forum during the recent Congressional Black Caucus Foundation’s Annual Legislative Conference (CBCF-ALC) in Washington, D.C.

“Let me be clear. We are here today assembled in this room to begin down a road to solutions identifying the key areas where policy changes can have a measurable impact and create a space for true democracy in housing allowing all people of our nation to climb up the middle class ladder to build wealth through home ownership,” Hicks continued. “NAREB believes it is possible and doable.” 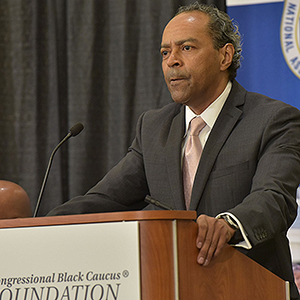 Following Hicks’ remarks, a string of policy experts — including a member of Congress — who also addressed the forum, agreed that the matter is dire. Startling findings documented in the 2018 State of Housing in Black America (SHIBA) report, commissioned by NAREB, undergird their sentiments. According to the SHIBA:

In the 10 cities with the largest Black populations, segregation remains extremely high with dissimilarity rates ranging from a low of .60 percent in Detroit to a high of .83 percent in Chicago. Washington, D.C., stands at .70 percent. The dissimilarity index measures the extent to which Blacks would have to move to different census tracts in order to achieve an even geographic distribution of households by race throughout the city. Dissimilarity indices over .60 percent are generally considered high.

Since the peak year of Black homeownership in 2004, Black gains have been eviscerated due largely to the failure of federal financial regulatory agencies to prohibit predatory loan products that were disproportionately peddled to affect Black consumers, as well as insensitive federal policies that provide less assistance to Black households facing foreclosure than to non-Hispanic White homeowners. 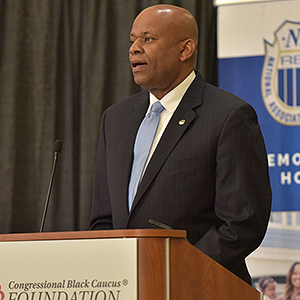 U. S. Rep. Gregory W. Meeks (D-N.Y.), a member of the House Financial Services Committee, promised that Black homeownership —  viewed as a key vehicle for Black wealth — will not be continually overlooked or purposely ignored by lawmakers. If Democrats win control of the House, Meeks hinted that the continued housing crisis in the Black community will be high on the legislative agenda.

“It is still the basic and most important and probably the biggest investment that people of color will ever make in their lifetime. And those of us in Congress learned our mistakes. We’re going to fix it so that this will never happen again,” said Meeks, whose congressional office sponsored the Sept. 13th forum.

The release of the SHIBA report coincided with a robust panel discussion. Experts not only expressed disdain for the status quo, but also outlined their views and policies that would remedy the racial discrimination in home buying.

Keynote speaker Richard Rothstein, senior research associate at the Economic Policy Institute, pointed out how Brown v. Board of Education abolished segregation in elementary and secondary school systems and gave rise to the civil rights movement with its marches and sit-ins to abolish civil rights violations in other areas of American life. He illustrated everything from buses to lunch counters to public accommodations to water fountains.

“Yet, having done all this, we’ve left untouched the biggest segregation of all,” Rothstein said. “Today we have segregated neighborhoods all over the country and these segregated patterns create the most serious social problems this country faces; including the achievement gaps between Black and White students, health disparities, and violence visited on African-Americans by police.” 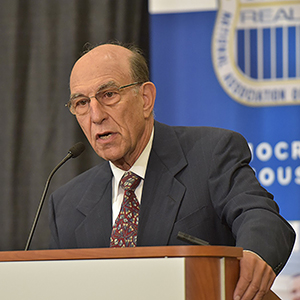 The audience applauded enthusiastically when Rothstein concluded that the first step must be “to disabuse ourselves of this myth” and false historic teachings.

Roosevelt Institute Senior Fellow James H. Carr, a co-author of the SHIBA report, illustrated, in a nutshell, how discrimination is embedded throughout the process by which most African-Americans seek homeownership.

“If we’ve been racially discriminated against such that we don’t have the wealth, then how can we all of sudden have the down payment of 15 and 20 percent? And if we don’t have that down payment when we go for a loan, we then pay almost astronomical amounts of insurance and fees to compensate for the fact that we don’t have the 20 percent down payment. Is that de facto or de sure? Is that disparate impact?” Carr asked . “Sounds like there’s a problem. So the conclusion of sorts of the context for this year’s report is simply this: Not only have we not put into place remedies that are as powerful as the negative forces that have driven Blacks into this precarious financial state, but we’re still having federal policies and actions that further drive us into a financial abyss.”

Hicks concluded that NAREB would be moving forward with a vigorous push for democracy in homeownership.

“We started this conversation by saying we do not see ourselves as just wallowing and discussing the problems and the history, but also talking about solutions,”he said. He outlined three primary policy principles that “we believe we want to help push forward in this country.”

They are, in part:

Rothstein, also the author of the book, “The Color of Law, a Forgotten History of How Our Government Segregated America”, concluded that any successful movement must take place with the inclusion of Blacks and Whites.

“We need allies. We can’t progress in this area without a bi-racial movement, a new Civil Rights Movement, which has always been bi-racial. And we need the bully pulpit of politicians like members of the Congressional Black Caucus.”