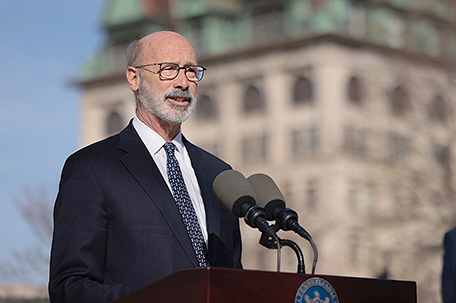 Governor Tom Wolf recently announced that the Commonwealth of Pennsylvania will fulfill its commitment to raise the minimum wage for commonwealth employees to $15 per hour by January 31, 2022.

“I am committed to supporting workers, creating family-sustaining jobs and ensuring that, in Pennsylvania, hard work is rewarded fairly,” Wolf said. “In 2018, I made a promise to our state workers, to ensure that they are fairly compensated for their service to our commonwealth. Increases in the minimum wage raise employee morale, productivity and work quality, while lowering turnover and training costs. Accelerating the increase to $15 will better align worker salaries with the current cost of living, while providing even greater cost and efficiency savings for state government.”

Under Gov. Wolf’s leadership, the Commonwealth of Pennsylvania has taken steps to modernize its approach to work and position itself as a model public sector employer for the 21st century. Improvements such as raising the minimum wage put the commonwealth in a strong position to attract and retain skilled workers, while better supporting workers and families in Pennsylvania. In the face of a lack of action by the General Assembly to raise the minimum wage for all workers, Gov. Wolf encourages all employers to follow suit and take action to ensure fair pay for hard work.

Gov. Wolf has fought for workers’ rights and fair wages throughout his administration. Most recently, in the fall of 2021, the governor took executive action directing the Department of Community and Economic Development to verify businesses receiving an offer of assistance provide workers paid sick leave and pay no less than the minimum wage for state employees before making a financial incentive offer.

Gov. Wolf is also renewing his call for the Republican-controlled General Assembly to raise the minimum wage for all workers in Pennsylvania.

“Over the past decade, the cost of food, gas and just about everything else has gone up, but the purchasing power of our minimum wage has dropped by nearly 17%,” he continued. “Compared to 50 years ago, the minimum wage has lost 31% of its value. That means today’s workers have to work 31% more hours to earn the standard of living that was considered the bare minimum half a century ago.”

“Pennsylvanians are getting left behind the rest of the nation because of our low minimum wage, and it’s just not right,” Wolf concluded. “I call on the Republican leaders in the General Assembly to pass legislation to raise the wage for Pennsylvanians and give our workers the boost they need and deserve.”

Wolf has proposed a minimum wage increase each year he has been in office. The governor is again urging the General Assembly to pass S.B. 12, sponsored by Sen. Tartaglione (D-2nd Dist.), or H.B. 345, sponsored by Rep. Patty Kim (D-103rd Dist.), to raise Pennsylvania’s minimum wage to $12 an hour with a path to $15 an hour.