Gov. Wolf: $2,000 direct payments to Pennsylvanians ‘will make a life-changing difference for families in communities across the commonwealth’ 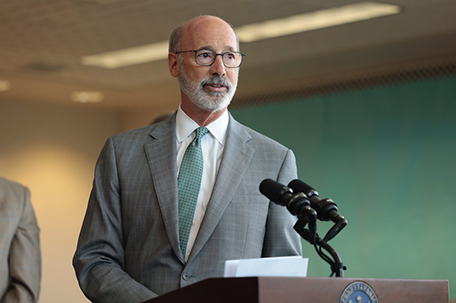 Gov. Tom Wolf was joined by State Rep. Sara Innamorato and local officials at Roots of Faith ministries in Sharpsburg recently to continue calling on Pennsylvania’s Republican-led General Assembly to finally take action and support Pennsylvanians by passing legislation for the $500 million PA Opportunity Program, which would send $2,000 checks directly to Pennsylvanians in need using money the commonwealth already has in the bank.

“This money will make a life-changing difference for families in communities across the commonwealth, providing a much-needed buffer against prices that are artificially and temporarily higher due to inflation,” Wolf said. “Let’s put this cash back in the pockets of Pennsylvanians, to help cover the higher costs of gas, groceries, and everything else.

Through the PA Opportunity Program, Pennsylvania householders with an income of $80,000 or less would receive direct payments of up to $2,000. First introduced in February with the proposal to use American Rescue Plan Act (ARPA) funds, Gov. Wolf’s $500 million PA Opportunity Program now proposes using general funds and has the support of Democratic members who have submitted co-sponsorship memos in the House and Senate signaling their intent to reintroduce legislation to fund the Program.

Despite wide public support, the Republican-led General Assembly chose to not appropriate funding for the program during budget negotiations. Today, Rep. Innamorato echoed her colleagues’ support for the direct payment program.

“Like the recovery from the 2008 financial crisis, Pennsylvania’s recovery from the COVID-19 recession has been unbalanced, slower and less complete for working families and low-income folks than for wealthier Pennsylvanians,” Innamorato said. “The PA Opportunity Program would help complete Pennsylvania’s recovery with a payment of up to $2,000 for working families across Pennsylvania who often cannot access many of our social safety net programs. Working people and families would greatly benefit from this much-needed support to cover the costs of childcare, groceries, back-to-school materials, and other basic household needs.”

“For the past eight years, Roots of Faith has been dedicated to alleviating poverty in our community. We are truly a place of hope and help for those in need,” Stanley said. “In recent months, we have seen an increase in food insecurity, people struggling to pay utilities, and homelessness. People are making choices daily between paying their rent and buying food. This extra money will help lessen that burden for so many families.”

In addition to Rep. Innamorato and Roots of Faith, the governor was joined by Allegheny County Executive Rich Fitzgerald and Pittsburgh Mayor Ed Gainey.

“Everyone in Pittsburgh deserves to have opportunities to thrive, and this financial support will help thousands of people here in our city,” Gainey said. “It will help a family stay in their home, put food on their table, or help cover the costs of their prescriptions. We need to act urgently to get this money into the hands of families who need it.”