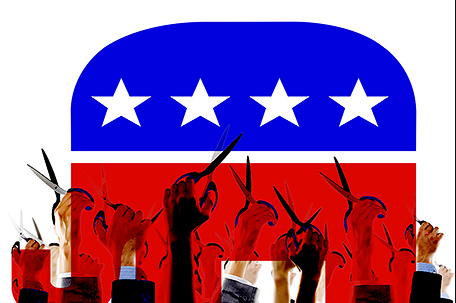 WASHINGTON– Republicans now in charge of Congress offer their budget blueprint this week with a pledge to balance the nation’s budget within a decade and rein in major programs such as food stamps and Medicare.

More pressing for many Republicans, however, is easing automatic budget cuts set to slam the military. Not only that, a GOP divide is pitting defense hawks against budget hawks is threatening the party’s ability to advance the measure.

The chairmen of the House and Senate Budget panels plan to release their budget plans this week – the House on Tuesday and the Senate on Wednesday. The nonbinding measure called a budget resolution sets broad parameters on taxes and spending; it requires follow-up legislation later this year to implement its balanced-budget goals, and Republicans are unlikely to take on that task as long as President Barack Obama occupies the Oval Office.

Instead, they will propose major spending cuts to programs such as Medicare, health care subsidies, food stamps and the Medicaid program for the poor and elderly to produce a budget that’s balanced. Such cuts, if actually implemented later, would likely slash spending by $5 trillion or so over the coming decade from budgets that are presently on track to spend almost $50 trillion over that timeframe.

To the dismay of defense hawks, however, they can’t really use Congress’ arcane budget process to repeal automatic Pentagon cuts that will strip $54 billion from core Pentagon programs based on limits set under a hard-fought 2011 budget deal. Nor can they match Obama’s proposal to add $38 billion to the Pentagon’s budget next year without exposing the entire budget to a parliamentary challenge by Democrats.

“If we’re going to have a lower (defense) number than the president of the United States is proposing, we have no credibility on saying that we are committed to defending this nation – not when every service chief, every witness before our committee says it will devastate … our ability to defend the nation,” McCain said. “You can’t do that and claim that you care about national defense.”

In the House, 70 Republicans have signed a letter by Rep. Mike Turner, R-Ohio, pledging their “unwavering support” for Obama’s $561 billion defense request instead of the $523 billion amount mandated under the 2011 budget deal. That law requires automatic spending cuts for years because of the failure of Congress to produce follow-up deficit cuts. If they line up against Price’s budget plan as a bloc, it’ll be impossible to pass it.

A bipartisan Senate group, including Armed Services Committee members Lindsey Graham, R-S.C., Kelly Ayotte, R-N.H., and Tim Kaine, D-Va., hopes to develop a package of alternative cuts and, perhaps, new revenues to replace the forced cuts to the Pentagon and nondefense programs. They’re hoping to replicate a 2013 budget pact that partially eased the automatic cuts for the 2014-15 budget years.

Defense hawks are likely to win some relief after Price adds about $13 billion in extra money above Obama’s budget request for overseas military operations that would effectively provide relief to core Pentagon accounts like training and operations and maintenance.

Meanwhile, Price says his upcoming budget will borrow heavily from those produced by former Budget Chairman Paul Ryan, R-Wis., most notably by envisioning a controversial Medicare plan that would, for people 56 or younger today, transform the system into a voucher-like program that subsidizes purchases of health insurance on the open market.

House Republicans say this “premium support” model would ensure Medicare’s viability and spur innovation. Opponents say the subsidies won’t keep up with medical inflation and will force people to pay higher out-of-pocket costs and saddle them with health plans that are inferior to traditional Medicare.

Enzi will go in a different direction on Medicare, said GOP aides, forgoing the premium support approach and instead adopting Obama’s goal of paring $402 billion from the program over the coming decade – though not his lengthy roster of proposals to apply the cuts to health care providers.

Price is also likely to replicate Ryan’s approach to cutting Medicaid and food stamps by transforming them from federal programs into wholly state-run programs that receive lump sum funding from the government. That approach makes it easier to cut these programs without saying how many people would be dropped or how their benefits would be cut.

In the four years that Republicans have controlled the House, they have yet to try to implement their controversial cuts, which was understandable given that Democrats controlled the rest of Washington. But now that Republicans have seized the Senate there’s no expectation that they will follow the example of Republicans in 1995 and try to pass real legislation to balance the budget – with the certainty that Obama would veto any such measure as Bill Clinton thwarted the 1995 Newt Gingrich-led drive for a balanced budget.

“It’s going to require presidential leadership. We don’t have it,” said Sen. Ron Johnson, R-Wis. “We do not have a willing partner.”