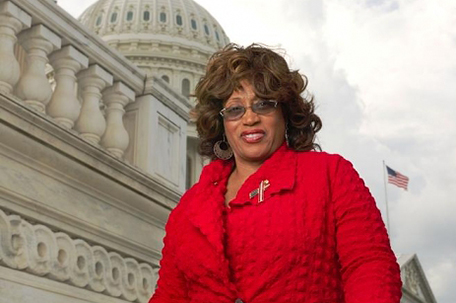 Members of the Florida Republican Party recently conducted a secret meeting to lay out a plan to unseat Congresswoman Corrine Brown through redistricting. The plan – spearheaded by Florida State Rep. Janet Adkins – would pack inmates/felons who are ineligible to vote into the 5th Congressional District.

But as lawmakers and GOP activists in the meeting were secretly plotting against Brown, they were also secretly being recorded.

Democratic Rep. Corrine Brown joined Roland Martin on Tuesday’s edition of “NewsOne Now” to discuss the GOP redistricting plot against her. She told Martin that neither the Democratic National Committee nor Florida’s Democratic Party have assisted her in combating the attack.

Politico.com reported Adkins as saying during the closed-door meeting, “You draw [Brown’s seat] in such a fashion so perhaps, a majority, or maybe not a majority, but a number of them will live in the prisons, thereby not being able to vote.”

Adkins, who is heard detailing the plan to oust Brown, is also heard on the leaked audio recording of the private GOP meeting saying the following about the population of the proposed congressional district:

“They’re a part of the population. No, they can’t vote. So when you take a look at, and I don’t know what the numbers are, but you take a look at how many minorities are in the prisons within that newly drawn proposed congressional — how many of them live in the prisons, that’s why Corrine Brown is so against having an east-west, because her concern is that they live in prisons and they can’t vote. So it’s a perfect storm.”

Republicans in Florida have reportedly said the proposed redrawn 5th Congressional District was a Democratic idea, so in essence, Rep. Brown is “criticizing a Democratic plan.” Brown responded to that assertion, saying, “Let’s be clear, in politics you don’t have permanent friends or permanent enemies, you got permanent causes.”

Brown continued, “A lot of people feel that we can be the sacrificial lambs, but we’ve already given. The 1965 Voting Rights Act is where we gave. We gave blood to be at the table … if you are not at the table, you’re on the menu.”

Rep. Brown also told Martin what is happening to her is not just happening in Florida – it’s taking place all over the country: “There is an organized effort to take African Americans out for whatever purpose — divide our districts, try to get more civility in Congress — we’ve already given.”